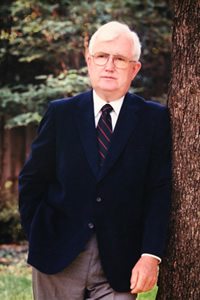 Dr. Boles led Arlington Independent School District through a period of rapid growth. He served on the board for 15 years, and held the office of board president eight times. Dr. Truett C. Boles gave outstanding leadership in our school district during his tenure from 1966 to 1981.

Dr. Boles grew up in Littlefield, Texas, a small town northwest of Lubbock. His father was a high school principal and his mother taught school at one time. He attended Texas Tech University where he met his future wife, Beth. On November 10, 1951 they were married and in January 1957, they moved to Arlington, where he became the first medical specialist of his kind in the community. He retired from his medical practice June 26, 1998 after 47 years!

Dr. and Mrs. Boles have two children. Their son, Chris, a molecular biologist is married and has the Boles' first granddaughter, who is seven. Their daughter, Becky, is an architect recently married another architect.

Trustee Diane Patrick, who chaired the subcommittee that selected the school name, said Boles "guided the district through an era of unprecedented growth" during his tenure from 1966 to 1981. "His name is on the dedication plaques of 25 buildings in the district, and that doesn't even included all the additions to schools." (Fort Worth Start Telegram, January 15, 1986)