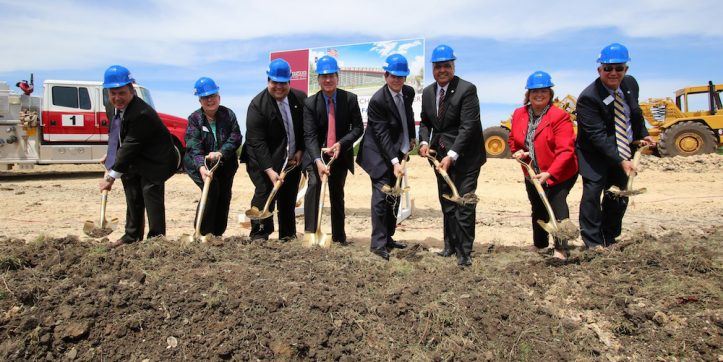 Bond-related construction is in full-swing. In fact, by the fall, 51 schools will have construction projects underway or already finished. The bond is also funding several new districtwide facilities, along with two new elementary schools.

The future districtwide CTC is being built on the site of the former Hutcheson Junior High. Hutcheson closed at the conclusion of the 2014-2015 school year and demolition of the building reached 100 percent completion in early 2016.

Construction of the CTC is being managed by Balfour Beatty Construction, following plans designed by VLK Architects. The building is scheduled to be complete in the summer of 2017.

[See photos of the Hutcheson demolition and the CTC groundbreaking. Learn more about the future Career and Technical Center.]

The school building is receiving extensive renovations to enhance the fine arts and dual language programming the new academy offers. The renovations will provide state-of-the-art fine arts spaces like strings rooms, piano practice rooms, drama space and dance studios. In addition, adjustments will be made to ensure there are enough classrooms so that each class – or cohort – can spend half the day in an English classroom and half the day in a Spanish classroom.

The work is being done in three phases, with each phase in a different part of the building. The phasing allows the construction to take place with minimal interruption to the school. Construction workers are only allowed in blocked-off construction areas and are required to use a separate entrance and exit. In addition, all workers must undergo a background check before being allowed to work at Corey or any AISD school.

Much of the initial work was demolition – clearing out spaces to make way for the special requirements of the fine arts and dual language programming. With the demolition complete, the workers began building new walls. They are currently working on the music, dance and art rooms. In the music rooms, three layers of sheetrock were installed, along with special acoustical caulk, to soundproof the area. There is also electrical work and plumbing underway. Prep work for flooring has begun, along with some texture and painting, and ceiling tiles and lighting are being installed.

[Click here for more information about Corey Academy of Fine Arts and Dual Language. See photos of the construction.]

McNutt Elementary
The site of the future Sandy McNutt Elementary, located next to Workman Junior High, is now full of activity. The fall rain initially caused some delays, and a hard rock boulder layer underground made drilling piers more difficult than originally expected. But more powerful rigs were brought in and now the piers have all been drilled and poured. The building went vertical in February, first with masonry in the gym, strings and music room area, and then structural steel started on Feb. 22.

The building is divided into different areas, with each area in a different phase of construction. Depending on the area, current work includes masonry, metal framing, roofing, drywall and roughing in for plumbing, electrical and HVAC systems.

The construction of McNutt Elementary is being managed by Balfour Beatty Construction, following plans designed by Corgan. McNutt is scheduled to open in August for the start of the 2016-2017 school year.

Multi-purpose Activity Centers
Construction of the Multi-purpose Activity Centers (MACs) – one at each AISD traditional high school – is well underway. The building permits were obtained for all six sites on Nov. 2, 2015, and work started shortly after. Though all six are being built simultaneously, each is moving at a slightly different pace. [Click here for more details about the MACs.]

Substantial completion of the 77,704-square-foot facilities is planned for August and September of 2016, which means the buildings will be ready for use next school year. Construction is being managed by Balfour Beatty Construction, following plans designed by Huckabee.

Arlington High School
At the Arlington High School site, which is the farthest along of the six, erecting structural steel for the metal building began in January and sheathing for the field area was completed in March. The metal roof deck and miscellaneous perimeter metal work was completed in April. The rough-in of overhead mechanical, electrical and plumbing is underway, as is masonry, interior painting, lighting installation and more. [See construction photos and photos from the air.]

Bowie High School
April was a busy month for Bowie’s MAC construction. Paving of the fire lane and parking lot was completed, and after much preparation, the slab was poured on April 8. Then steel erection and masonry began the following week. Steel work and masonry continues as rapid progress is now being made. [See construction photos and photos from the air.]

Lamar High School
Steel erection began at the beginning of March and related detailing and installation of wall panels was ongoing throughout April. Masonry is ongoing and roofing and floor decking is underway. Metal stud framing and exterior sheathing started in April and the rough-in for mechanical, electrical and plumbing is ongoing. [See construction photos and photos from the air.]

Martin High School
Steel erection began at the beginning of March. Work on the structural steel continues, as does the masonry and rough-in for electrical and plumbing. Exterior metal stud framing began this month, along with roof decking. [See construction photos and photos from the air.]

Sam Houston High School
Steel erection began at the beginning of March. Work on the structural steel continues, as does the masonry and rough-in for electrical and plumbing. Exterior metal stud framing began in April, along with roof decking. Workers also spread topsoil in the field area last month. In May, workers will begin installing fire sprinklers, structural trim and CMU walls on the second floor. [See construction photos and photos from the air.]

Seguin High School
Steel erection began at the beginning of March. Work continues on the roof and wall panels of the metal building, as does the masonry and rough-in for electrical and plumbing. Exterior metal stud framing and sheathing began in April, along with roof decking. Workers also began installing fire sprinkler lines. [See construction photos and photos from the air.]

Eddy and Debbie Peach Elementary
Construction of Peach Elementary, in north Arlington on Baird Farm Road, was affected by all the rain in the fall. In addition, underground concrete, discovered while digging for utilities, had to be removed.

But now the new elementary school is well underway and starting to look like a real building. It is a fluid process, with different areas of the building in different stages of construction. The building went vertical with structural steel in early February, and all the detail and welding work related to the steel is ongoing. The site is full of activity as many other aspects of the construction are also underway, like masonry for the gym area, which was topped out in April, MEP work, decking, sheething installation in the kitchen and cafetorium area, foundation and crawl space work in another area, roofing and much more. In addition, pouring concrete for the fire lane, which encircles the building, was completed in April.

The construction of Peach Elementary is being managed by Balfour Beatty Construction, following plans designed by Perkins+Will. Peach is scheduled to open in August for the start of the 2016-2017 school year.

Ousley Junior High
All building-related construction at Ousley Junior High is now complete, with most of it done last summer. All that remains is work on Ousley’s outdoor athletic field, which started this spring and is ongoing. The football field is being repositioned, a four-lane track is being added, and the field will receive sports lighting.

The completed work at Ousley included a number of projects related to life-cycle upgrades and replacements, along with improvements designed to accommodate growth. The student and faculty population has grown considerably this school year since it consolidated with Ferguson Junior High. The AISD raced to get most of the projects done over last summer so the campus would be ready when school started in August 2015.

The high-priority jobs completed last summer were changes associated with Ousley’s growth. While the building itself is large enough, some interior changes were required. The administration offices were renovated, with walls rearranged to accommodate more faculty, including an additional assistant principal and school counselor. Another task was the division of one very large classroom into three, which required adding walls and new doorways.

Workman Junior High
Construction is underway at Workman Junior High to build a 16-classroom addition. The school will also receive a new entrance, renovated administration space and life-cycle upgrades. The additional classrooms are being added because of an expanded student enrollment. Hutcheson Junior High closed at the end of last school year, and its students moved to Workman. Until the addition can be completed, portable classrooms have been brought in.

Building permits were received Oct. 28, 2015, and work began shortly after. Large amounts of rain in the fall and winter slowed things down a bit, but steady progress is being made. The drilling of piers for the classroom addition was completed in January, the last of the grade beams were poured in February, and the slab was poured in March. Much of the structural steel is now up and concrete for the second floor was poured recently. Many other tasks are underway as well, including the rough in for ductwork, electric, plumbing and fire sprinkler.

On the north side of the building, construction has begun on the new entrance and renovated admin space. The piers have been drilled and a plywood barrier has been erected in the existing lobby to separate students from the construction zone. Demolition of the area began in February. Grade beams and columns were poured in April. The slab will be poured in early May.

In addition to the work currently underway, Workman’s cafeteria was expanded over the summer and the kitchen was upgraded with new equipment. Just outside the cafeteria, on either side of the library, the lockers were removed and the area will be converted into new classrooms this summer.

Final plans are being put in place for work that will be done over the coming summer. Those tasks include many life cycle and deficiency upgrades throughout the existing building.

[See photos of the addition construction and the expanded cafeteria.]

The scope of construction projects at Ferguson included a number of life cycle upgrades and replacements. Among the projects completed over last summer was the replacement of 20 rooftop HVAC units, along with all related controls. The water fountains were replaced, along with the stage curtain and light fixtures. The weight room was converted into classroom space and ADA accessibility was improved, which included adding grab bars in the restrooms and installing a new ADA ramp and sidewalk. Technology connectivity was also upgraded, with additional data drops installed in the labs, and ID card access controls were added. The campus also received landscaping improvements and new signage.