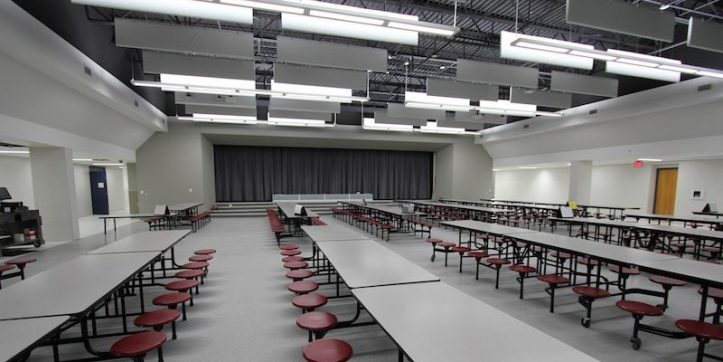 Aug. 26, 2016 - Corey and Jones Academies of Fine Arts and Dual Language began their second school year on Aug. 22, 2016, in the same buildings they were in last year – but now they look totally different.
Both school buildings are receiving extensive renovations, funded by the 2014 Bond program, to enhance the fine arts and dual language programming the new academies offer. The renovations will provide state-of-the-art fine arts spaces like strings rooms, piano practice rooms, drama space and dance studios. In addition, adjustments are being made to ensure there are enough classrooms so that each class – or cohort – can spend half the day in an English classroom and half the day in a Spanish classroom.

At Corey, the work started back in the fall, but was limited to just a portion of the building and focused on the music, dance and art rooms. Once school let out in May, the entire building became a construction zone as the building was reconfigured to promote the academy’s programming. In addition, many life-cycle and deficiency repairs and upgrades were made.

Most of the work was completed in time to allow school to begin this week, but work continues each day after school, in the evenings and into the night. About six more weeks are left until all the work is done.

At Jones, the renovation started when school let out last school year in May, and Jones became a flurry of construction activity all summer. The work is being done in three phases and won’t be completely finished until the spring. But the phasing plan – working in different areas of the building at different times – allows school to keep going.

This summer was phase one. Major renovations were done to the cafeteria and stage, office and main entry, gym, pod building, collaborative group areas, piano lab, music rooms, practice music rooms and east classrooms. Major structural upgrades were also completed to enhance and lengthen the life of the building, and exterior improvements, along with new landscaping, were done to improve the school’s aesthetics. The outdoor performance area adjacent to Jones will be complete later in the fall.

Phase two, which is already underway, includes renovation for the art rooms, STEM labs, collaborative group areas and interior classrooms. Then the third and final phase will renovate the library, dance room and theater arts room.

It’s an exciting time for Corey and Jones. Though dealing with construction on campus has been inconvenient at times, when it’s all done, the transformed, purposefully-designed school buildings will make it all worth it.

You might feel like you need a hard hat for this tour. Get a close-up, in-depth look at the future…
END_OF_DOCUMENT_TOKEN_TO_BE_REPLACED

Windows are going in, sheetrock is going up and the pool’s frame is in place. Check out the construction progress…
END_OF_DOCUMENT_TOKEN_TO_BE_REPLACED

Check out this virtual tour of the future Arlington ISD Arts and Athletics Complex. Great progress is being made on…
END_OF_DOCUMENT_TOKEN_TO_BE_REPLACED

Today is the 50th anniversary of Earth Day, a day designed to raise awareness about the negative impact our actions can…
END_OF_DOCUMENT_TOKEN_TO_BE_REPLACED

If you etched your name into a girls’ locker room bench at Arlington High School in the last 40 years,…
END_OF_DOCUMENT_TOKEN_TO_BE_REPLACED

When voters approved the Arlington ISD’s 2014 Bond more than five years ago, no one could have predicted the vital…
END_OF_DOCUMENT_TOKEN_TO_BE_REPLACED
Select Language