Longtime Arlington ISD employee getting her first chance in classroom 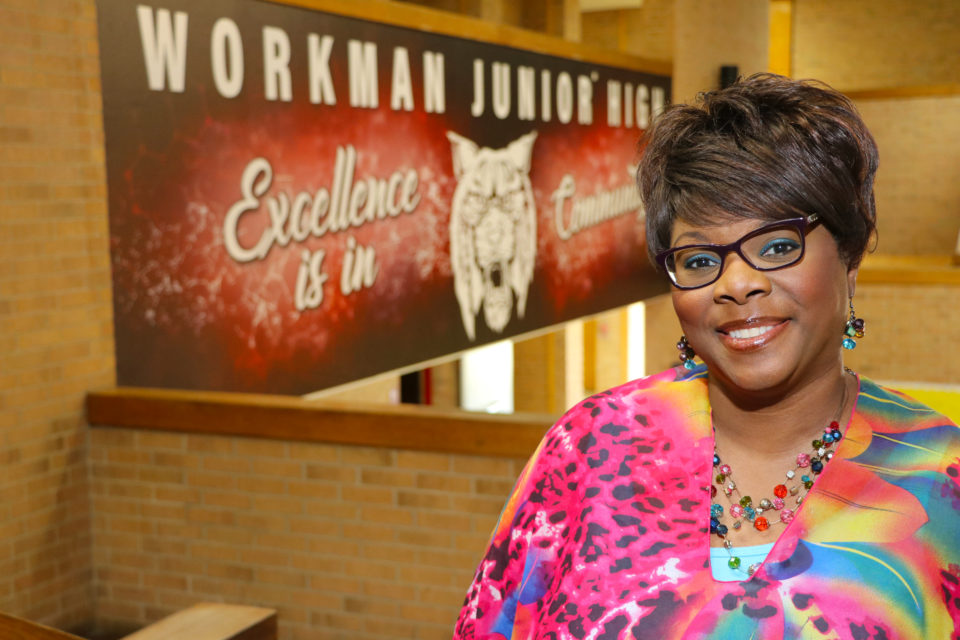 To launch each school year, Workman Junior High  teachers are tasked with a rather intriguing assignment: come up with an inspiring buzzword for their new crop of students to live and work by.

Call it an anchor to help steady the choppy academic seas to come.

While such a charge might be a tough one for even the most analytical of instructors, it was a no-brainer for Arnita Ware.

She knew her word right away. “Perseverance,” she whispered to herself.

Google p-e-r-s-e-v-e-r-a-n-c-e (never giving up; doing something despite difficulty or delay in achieving success) and you’ll likely find Ware’s mug pop up early and often in the search engine, cheesing right back at you.

Anyone within Arlington ISD who has met Ware – and based on this, her 30th year in the district, there has been quite a few – swiftly names her “positivity” and “perseverance” as traits that ooze out, much like a pot or rice boiling over and spewing everywhere and on everybody.

“She leaves you with a feeling that everything is going to be all right after all,” said AISD Executive Director of Finance Tony Drollinger, who met Ware when providing campus activity fund training to school secretaries. “She models Christian values in every encounter, and inspires people to be just a little better.”

The fact that Ware is presiding over an English class at Workman this year might not sound like such an overarching achievement on its own.

Until you learn that this is her first year as a classroom teacher.

Which means she did something entirely different for the first 29.

“Well, let me tell you what,” Ware explains, a wide grin spreading across her face via a Zoom conversation. “I started out as a receptionist at Workman. I helped open the campus at Barnett before going over to Carter as a principal secretary. I worked in the math curriculum office as an administrative secretary, as the principal secretary at Morton, a telephone specialist, in telecommunications, and an administrative assistant to the assistant over technology.”

Since pint-sized and pigtailed in New Orleans, Ware wanted to be a teacher. Her mom, now 80, used to call her “my little English teacher” because of her unrelenting but gracious way of laying down the grammatical law.

So how Ware worked in the district for three decades before presiding over her own classroom clearly illustrates the perseverance she possesses. She fell for English in high school because she had such a terrific teacher. They still converse today. Sitting on the shelf of Ware’s living room is an English trophy that, she says, “serves as a reminder and motivator.”

It was a motivator to obtain her college degree. While her mother begged her to go directly to college after high school, Ware had other plans. She was ready to start her family. So she did.

Once her Arlington ISD colleagues learned of this veiled love, they routinely encouraged her to return to school. She did enroll, at Tarrant County College South, in January of 1996. She completed her degree, in Applied Arts & Sciences, from Lamar University, last year.

Kids happened. So did divorce. Remarriage. A blended family that now counts eight sons (three apiece from her and him) and 15 grandchildren.

Ware kept trudging along anyway with a class here, a class there. Motivation went up. Down. Out. Up again. By 2014, though, she decided: this is it. No breaks. No stops. She pushed through those last six years.

The first year is often the roughest for teachers, but instructing in a COVID world “has been interesting,” Ware said, “and that’s interesting with all caps.”

“I have always had a deep respect for teachers,” she said. “Now I have an understanding of what they have to go through. COVID adds an extra layer of work. Having to produce and do things online. It’s not what I pictured. But, then again, it’s not what anyone pictured.”

The challenge of beginning remotely, especially as a newbie, has been connecting to her kids and creating a family-style, safe haven in the classroom. Still, she feels she’s off to a pretty good start.

“I get them,” said Ware who, by the way, is in Strathmore’s Who’s Who Worldwide, the database of leaders and professionals on the Web. “I know how to communicate with young people. I won’t have a problem in that area, particularly once we get back into the classroom.”

Drollinger agrees. “From the moment I met her, I was impressed by her calm, caring and professional way of dealing with anyone she came in contact with,” he said.

After decades of being so close – yet so far – from teaching in a classroom, Ware is eager to be the inspiration and encourager much the way she was inspired and encouraged by her own English teacher.

As she and her students figure out this new educational normal of online and in-person and everything in between, she hopes to instill her buzzword of p-e-r-s-e-v-e-r-a-n-c-e.

‘I’ll tell them what I told myself,” she said. “Just keep going.”