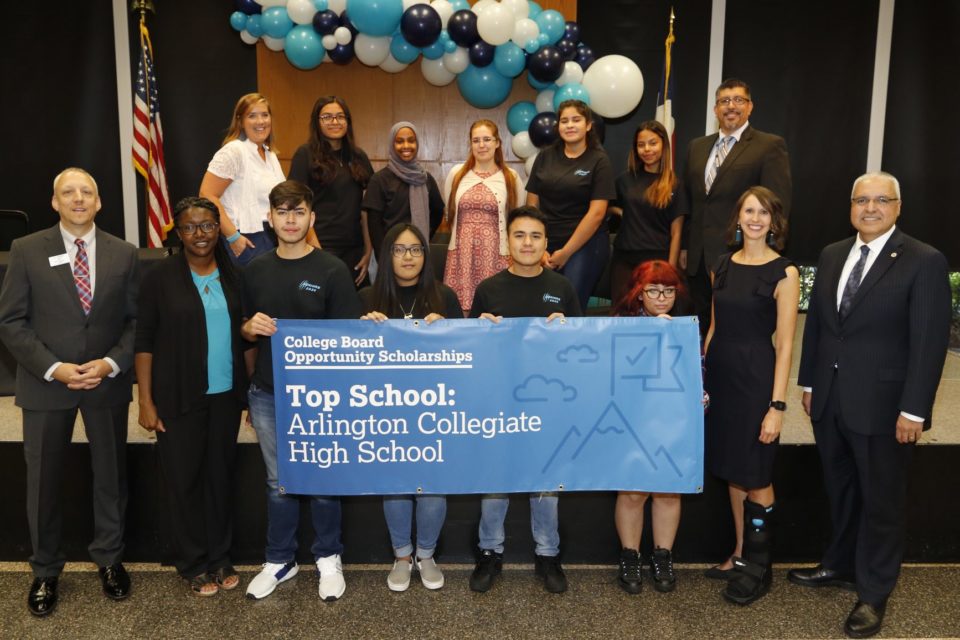 The sidewalk that connects Arlington Collegiate High School (ACHS) to the Tarrant County College (TCC) Southeast Campus has fittingly been dubbed the “Path to Success.”

That’s exactly what’s happened at ACHS since it opened as the district’s first early college high school in 2014. Nearly 200 students have already graduated from ACHS with not only their high school diploma but also their associate degree that they earned attending classes their junior and senior years up the walkway at TCC.

The district’s partnership with the TCC Southeast Campus has helped students who might not go to college not only graduate from high school but also have their first two years of college taken care of at no cost to them other than time and effort.

“Education is important to me, but ever since I came to this school I value it more than I did in the past,” said Adaoya O., who is a senior and set to be part of the third graduating class at ACHS. “Caring about your education is an investment for everyone. Education can lead you to a very good path in your life.”

That path can start at ACHS, where students start as freshmen before beginning to take the path to TCC as juniors for college-level courses. Students who are accepted at ACHS attend a bridge camp before their freshman year to prepare them for their time at the school. Once at ACHS students are provided with every opportunity and resource to succeed.

Students just have to provide the spark to make it happen.

“They have to be willing to work,” ACHS principal Jeff Krieger said. “As we always tell all the kids, you have to have a good attitude and be willing to give 100 percent effort. You do that you’ll be fine. The whole idea of this place is to give them the nurturing and support they need.”

Is deciding you want to go to an early college high school a little intimidating for a student when they’re in eighth grade? Certainly it can be. ACHS is different from a traditional high school because some of the extracurricular activities are different. But the bond formed at ACHS is no different than at any of the six traditional Arlington ISD high schools.

The class size has a lot to do with that. Because of the curriculum the class sizes are smaller and so is the student population. The average size of class per year is 100 students, which bonds the teachers and students in a way that bigger schools sometimes can’t do.

“What really makes ACHS different is how closely we work with everyone,” said ACHS teacher Jennifer Fuller, who is a former Milken Educator Award winner for exceptional teaching. “Because we’re so small, we know all about them. We can support them all in a different way. We want to make sure every kid finishes here and as successful as they can be.”

There’s a definite draw to going to ACHS.

“You have a clear path to university and college here,” said senior Bryan A. “It was important for me to come here because they give you that clear path. It’s more goal focused. Here your path is so clear that you know what you want to do.”

Make Arlington Collegiate High School the path to success for you. Start the journey by applying here.