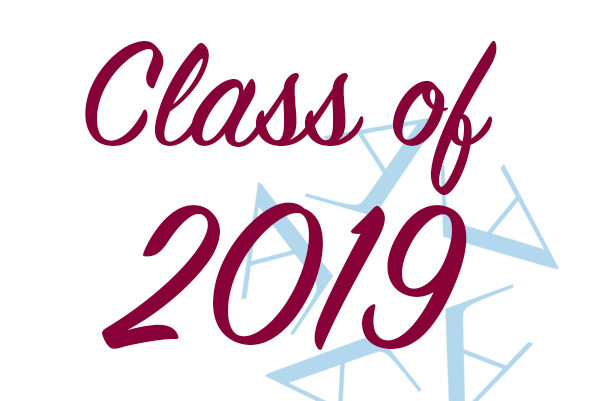 • Three words that describe you: Caring, ambitious, tenacious
• What was your motivation to becoming valedictorian? “I really wanted to be a role model for my younger sister and my little cousins. As a first generation college student I wanted to make my parents proud. Those were my motivators.”
• What’s your dream job? “It would probably be an animal rescue person. I really enjoy helping people and animals. I feel like that would be very fulfilling.”
• What’s something people don’t know about you? “A lot of people don’t know that I’m a vegetarian. That’s difficult for some people to grasp. I don’t eat fish or anything. I started when I was in middle school as a challenge for myself, and I learned more about it and the benefits. I started to obsess about it.”
• What’s the most challenging class you’ve taken and why? “It was definitely anatomy and physiology. It was a college course (at TCC). It was challenging. There was so much to memorize, the entire body, pretty much everything you can think about with the human body. It was tough. We were discouraged from taking the class because so many people had dropped it from the year before. I was determined to get an A, and I got an A.”

• Three words that describe you: Shy, tired, indecisive
• What was your motivation to becoming valedictorian? “I really knew what I was capable of when it came to my school work, and I didn’t want to settle for anything else. That led me to getting the best grades I could which really helped a lot.”
• What’s your dream job? “I’m not exactly sure. I’m planning on studying physics in college. There’s lots of branches in physics and I haven’t decided which one I want to pursue yet.”
• What’s something people don’t know about you? “Something interesting about me is I’ve been doing ballet since I was one-and-a-half years old, so that’s been a very big part of my life personally.”
• What’s the most challenging class you’ve taken and why? “Probably AP calculus. It was very difficult to understand the material. It was hard enough that I’m going to retake it in college no matter what I make on the AP test.”

• Three words that describe you: Dedicated, engaging, cooperative
• What was your motivation to becoming valedictorian? “One motivation is that whenever I was little my parents always told me to strive for the best and nothing else. That’s something I kept with me all four years of high school. It took me a while. I finally became No. 1 junior year and just ran with it. It took some work.”
• What’s your dream job? “Orthopedic surgeon for sure. That’s my dream job for sure. The biochem major helps with the MCAT.”
• What’s something people don’t know about you? “During high school I trained to become a black belt, and I finally became a black belt last November in Tang Soo Do, which is a Korean martial arts. It focuses more on street defense than the professional fighting scene.”
• What’s the most challenging class you’ve taken and why? “My most challenging class has to be Pre-AP Spanish III when I took it sophomore year. I never understood Spanish that well. It was hard for me to take it to the next level after taking Spanish II. My teacher always pushed me so I thank her for that. It was also so early in the morning. I’m not a morning person.”

• Three words that describe you: Major Shrek enthusiast
• What was your motivation to becoming valedictorian? “My parents motivated me and my parents always encouraged me to do my best.”
• What’s your dream job? “I don’t really know what my dream job is. I have an idea that I kind of want to work for that company and I want to work for that company in computer science. I know I want to program. I feel like I want to go into robots, making them and programming them. But that’s only because I have experience in that. I have a little bit of experience in software development but not too much. I feel like I might end up loving that more than programming robots. But as of now I feel like it’s probably robots.”
• What’s something people don’t know about you? “I’m a Shrekkie. I love Shrek. I have a very strong passion for Shrek. I have all the movies. I have Shrek random toys in my room. I have postcards hanging on my desk. I have most of the soundtracks. I have the Halloween special, the 3-D special and the exclusive 4-D special that you’re only supposed to see at Universal Studios. Basically the only thing I’m missing is the Christmas special and the fifth movie that hasn’t come out yet and the soundtrack for the first and fourth movie.”
• What’s the most challenging class you’ve taken and why? “I want to say AP World History. Everyone said it would be the hardest class in high school, at least at my high school, because the teacher who teaches it, the way he teaches it. It was really intense but it definitely benefited me in the long run. His quizzes were so strict and you had to have the answers verbatim. It was super challenging and it benefited me.”

• Three words that describe you: Responsible, optimistic, ambitious
• What was your motivation to becoming valedictorian? “There wasn’t a specific motivation. My personality is I’m a perfectionist. Any time I do anything I would feel bad if I didn’t do my best. It wasn’t really about rank to me, it was about doing my best work.”
• What’s your dream job? “Speech pathologist. I want to have my own business one day where it’s therapy on one side and speech pathology on the other. That way if a person, like a veteran with a speech impediment who also has PTSD, they can go to the same business and building and get both forms of therapy.”
• What’s something people don’t know about you? “I am a rock and gemstone nerd. I love gemstones. I would go and mine just to get the specific rocks I wanted. When I was younger I wanted to be a geologist but I changed. I keep them all around.”
• What’s the most challenging class you’ve taken and why? “It was probably AP Physics I. I could understand the concepts but I couldn’t really apply them easily. With other classes it was more of me reading over, studying, just kind of understanding it. With physics even if I read over it and watched videos it was very hard for me to understand. Even if I understood it, it was very difficult for me to apply that knowledge.”

• Three words that describe you: Persistent, empathetic, ambitious
• What was your motivation to becoming valedictorian? “Watching my older cousins coming up how they were able to be successful. Having to watch my mother struggle to see me get an education I wanted to make the best use of it. All they fought was for us to get an education they never got.”
• What’s your dream job? “Engineering is always something I’ve reached for because of the mathematics. Hopefully I can make a difference one day. I want to help those who came from the same background as me.”
• What’s something people don’t know about you? “I dance and you sing. I throw rifles when I was on the color guard team. I love Beyonce. I’m obsessed with her. She not only knows how to sing. She knows how to perform. She goes all out. I aspire to that.”
• What’s the most challenging class you’ve taken and why? “IB Physics Year 2. There was a lot of packets and a lot of worksheets to do at once.”

• Three words that describe you: Charismatic, rambunctious, altruistic
• What was your motivation to becoming valedictorian? “Obviously my family. My parents are immigrants so it was very hard for them to be here in the first place. I just wanted to make them proud.”
• What’s your dream job? “I want to be a surgeon. That’s my dream.”
• What’s something people don’t know about you? “I’m really, really bad at math and a lot of people think I’m good at math. My parents assumed I liked math and one year they got me an abacus for my birthday. I really wanted a jacket. I ended up giving that to my sister.”
• What’s the most challenging class you’ve taken and why? “Probably English because of the language barrier. I didn’t speak it natively [moved to the United States from Vietnam in the fourth grade]. It was really hard for me to get accustomed to it. I really liked the classes though.”