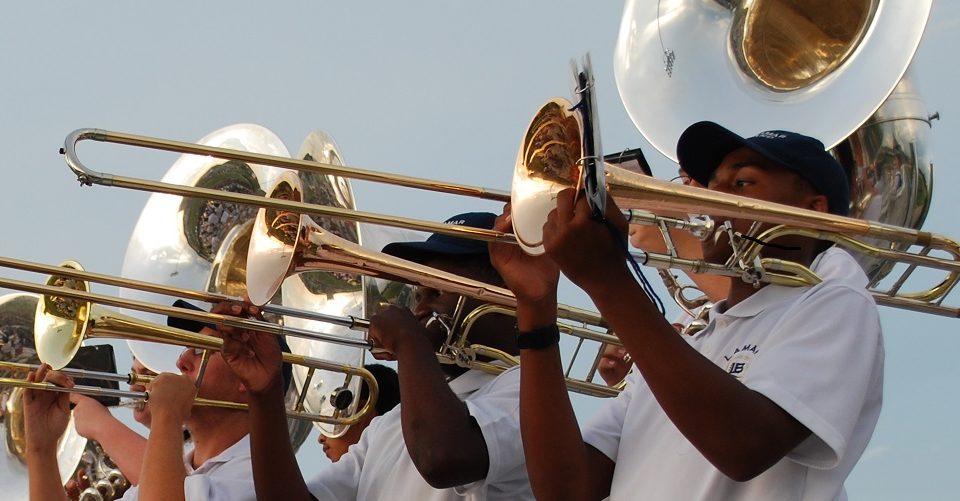 Summer 2019 – The band renovations underway at Lamar High School are much different than the original plan developed at the beginning of the 2014 Bond program.

While the previous plan provided some band hall improvements, the new plan is about comprehensively improving Lamar’s band program – which means improving music education for Lamar’s students. Thanks to the leadership and collaboration of AISD Director of Fine Arts Dr. Christopher Anderson and Lamar Band Director Alan Lang, along with support from AISD facilities staff and BRW Architects, the new plan aims to provide a holistic upgrade to the Lamar band program through a purposeful, outcome-focused renovation of facilities.

The original plan included some cosmetic improvements for the band hall, which would have been good. But Anderson and Lang recognized the need and opportunity to do better.

Anderson explained that the goal was not simply to give students a cool-looking band hall. The goal was and is to ensure Lamar music students get an outstanding educational experience.

The outcomes improve when all the educational pieces are in alignment, including the facilities. So, the new plan, which is currently in construction, goes beyond aesthetics and focuses on two objectives: provide instructionally-appropriate learning spaces and manage assets, which means protecting and taking good care of their instruments. The renovations are both inside and outside the building: adding additional instructional space, renovating the band hall and improving the parking lot where the band rehearses.

Inside the Lamar building, a former computer lab adjacent to the band hall was renovated in the spring and converted into a new ensemble room. The old lab was completely gutted, the walls were sound-proofed and the room received new carpet, lighting and paint.

The extra space is a game changer.

“You really need two spaces for a band this size,” Lang said.

For example, after-school sectional rehearsals often ended up in the cafeteria or hallways or wherever they could find some space. Color guard and orchestra always need practice space too.

But the new room doesn’t just provide an extra after-school rehearsal space. It also allows for smaller groups or ensembles to meet and practice during the day apart from the larger group in the band hall.

“This dramatically changes the effectiveness of how we teach,” Lang said.

Previously, Lamar’s band directors had only one classroom to use, the band hall. The new ensemble room provides a much more effective use of staff as a director can take a smaller group of students – like a particular level of musicians or a specific piece of the band – to the new room. It’s also better for the students as they get more focused, personal instruction.

“Programs have a tendency to really take off when we can divide and conquer,” Anderson said.

The band hall itself is receiving renovations as well, with new carpet, paint, lighting and ventilation. In addition, all the old instrument storage, which was insufficient and unlockable, is being torn out and replaced with new cabinets.

The new ensemble room is getting new storage as well. Plus, two locker rooms became available when athletics moved out to the new Multipurpose Activity Center (also bond-funded) in 2016. The band now uses one for storage, and the color guard uses the other.

All the new storage is critical. A major fine arts piece of the 2014 Bond program was new instruments. Along with upgrading the instruments that AISD campuses already had, the AISD also eliminated instrument fees in 2014 to ensure access for all students. That meant that schools needed even more instruments, which the bond program funded.

The hundreds of new instruments have been great and very much needed, but there is a catch.

Those instruments need to be stored somewhere.

Even before the all the new instruments, Lamar’s storage was inadequate – unlockable and inefficient. It was just large open boxes.

But Anderson, Lang and the architects made protecting their musical assets a priority. They developed a new storage plan and design that completely removes the old and replaces it with lockable cabinets sized for specific instruments, which allow for a much more efficient use of space.

“We’re going to be in really good shape for instrument storage,” Lang said.

Outside the Lamar building, the parking lot where the marching band rehearses is currently being redone. A new surface is badly needed.

Full of holes and poor patch jobs, the parking lot has been a treacherous place to march and the cause of many twisted ankles.

It’s tough for a student to focus on playing an instrument and marching a routine when he or she constantly has to look at the ground to avoid potholes. The sound of the band and the precision of the marching suffers.

But that will change in August.

“They will have an instructionally appropriate place to march,” Anderson said.

With a new level surface, the marchers will be able to look up at the prescribed 10 degrees and hit all their notes and steps.

They will also get a new band tower later in the semester. Multi-level with stairwells, this new tower will be a significant upgrade, much safer than the old, and large enough and sturdy enough for multiple instructors to use it simultaneously.

With school is out for the summer, construction has been underway in earnest. While that means an inconvenient summer – instruments had to be moved off site and summer rehearsals are being held at Nichols Junior High – it will be well worth it in the end.

“I can’t wait to see the difference in the kids once they see this,” Lang said. “I predict the kids will have a better sense of pride.”

They will certainly have a better band program with access to improved, instructionally-optimal facilities.

“I didn’t expect anywhere near this level,” Lang said of the improvements.

Learn more about all the Bond 2014 projects at Lamar High School and see photos.