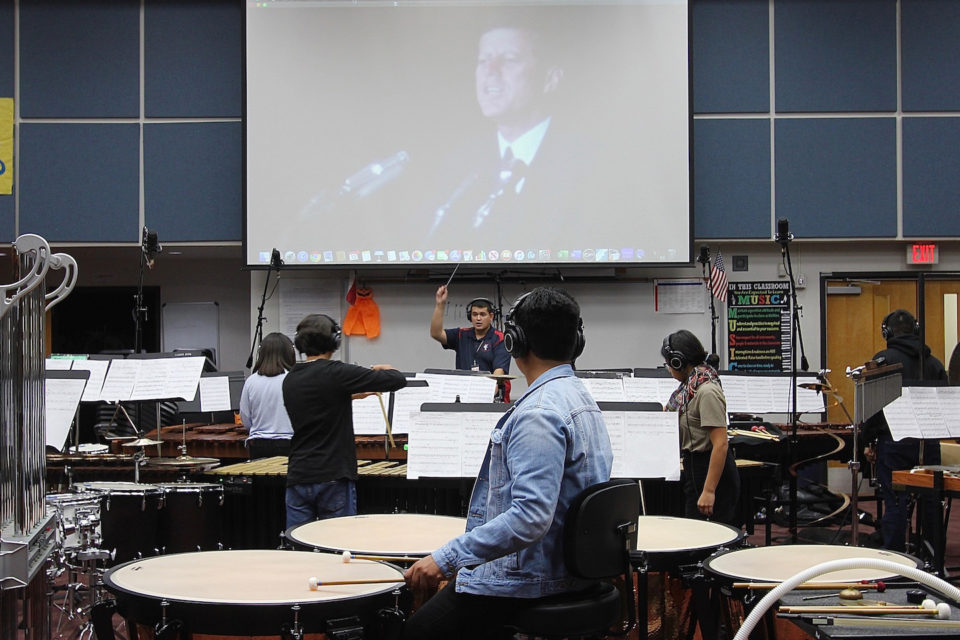 SPECIAL ENCORE PERFORMANCE
Tuesday, December 17, 2019 | 7 p.m.
Free Event | Sam Houston High School Café
Due to the overwhelming community response, we are happy to announce a special, one night only, encore performance of three world premieres presented by the Sam Houston High School Percussion Ensemble in collaboration with the Sixth Floor Museum at Dealy Plaza in Dallas!

Nov. 22, 2019 – Last night, Sam Houston High School students honored the legacy of John F. Kennedy and commemorated the 56th anniversary of his assassination. The nine students, all part of a percussion ensemble, performed live during the world premiere of a new documentary, “Three Hours in Dallas,” at the Sixth Floor Museum.

“I really consider this my crowning achievement to this point,” said Xavier B., one of the musicians in the ensemble.

The ensemble’s director, composer and Sam Houston teacher Jesus Martinez, composed the original soundtrack for the 16-minute film that chronicles the three hours JFK spent in Dallas on that fateful day in 1963. The film itself is mostly silent, except for a few highlights of speeches given by JFK and Jacqueline Kennedy.

Martinez, who has scored a number of other films as well, chose the percussion ensemble “in order to create natural effects throughout the film.”

The score syncs perfectly with the footage in the film, bringing the scenes to life and evoking emotion from the audience.

“We get to project the emotion that was felt back then,” said Maria B., another member of the ensemble.

“We wanted to keep it as a totally immersive soundscape between the kids and the video,” Martinez said in an interview with Amy Bishop on WRR 101.1 FM.

“I like how every note is one small portion of the film,” said Bryan C., a senior in the ensemble.

In addition to playing the piece live with the film, Sam Houston’s ensemble also premiered two other pieces written by local composers.

The performance was the culmination of months of hard work.

“My students have really loved the idea of film music,” Martinez said. “When I introduced this idea to them, they were more than willing to do it. Marching season just ended last week for us, so they’ve been doing double duty until 6, 7, 8 at night sometimes … It’s incredible, and they’re willing to do it.”

The students are part of a new music and live film scoring ensemble that Martinez started three years ago with funding from a Transformation Through Innovation grant, part of the AISD’s 2014 Bond. The program teaches students how to compose and perform music for film.

“It’s the first of its kind in the nation,” Martinez said.

“Our next step is to hopefully be able to partner with IB Film and pair student composers with student directors to collaborate on a project that is completely student-led,” Martinez said.

See more photos of the Sam Houston percussion ensemble as it practiced for the premiere.