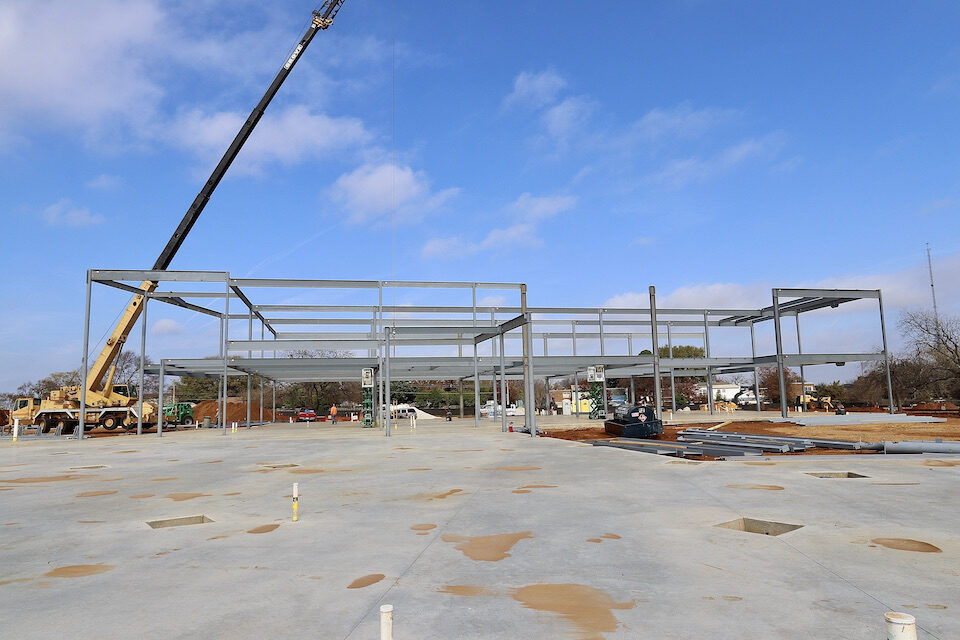 What’s the Buzz at Webb?

The students at Webb Elementary are all abuzz. And it’s not just because of the holidays. It’s because their new school – under construction next door to their current building – has gone vertical.

That means the steel is now being erected for the frame of the building. The construction site isn’t just a bunch of dirt and concrete now. Now, it’s starting to look like a real building.

“It’s going to be huge!” said one fourth-grader.

“Is it going to be two stories?!” a third-grader asked.

“Will there be stairs?” another chimed in.

“What color will it be?”

And it’s not just the students who are excited. Teachers are, too.

“Teachers and students are excited from watching the process of the new school being built,” said Webb principal Evelyn Navarro-Gaspar. “Students said it seemed like the steel beams were put in overnight, and it’s moving along so fast while teachers are intrigued at the process and try to guess with their students what section will be when it’s done!”

Webb is the first of four school replacements funded by the 2019 Bond, an effort to modernize the district’s schools and revitalize their neighborhoods. It’s all about providing generations of students with the opportunities they need to succeed in the 21st century.

The new school building at Webb will replace the current building, opened in 1960 as a junior high. Webb’s current site is large enough that the new building is under construction on the property while the current building remains open. Once the new facility is finished in the fall of 2022, the Webb students and teachers will just move in from next door.

There is still a lot of work to be done, but now that construction has gone vertical, it feels more real, and Webb staff are starting to prepare for the new building.

“As part of the 12 Days of Staff Appreciation in December, grade level teachers had the opportunity to review a map of their first or second story floorplan and their pod,” Navarro-Gaspar said. “They got to work with their grade level team to choose their classroom! It was a neat process to get maps done to where teachers got to see where their classes are in relation to the rest of the floorplan. Now, we have to work with non-homeroom teachers to decide on their space at the new Webb! Pretty soon, everyone will have a new home there.”