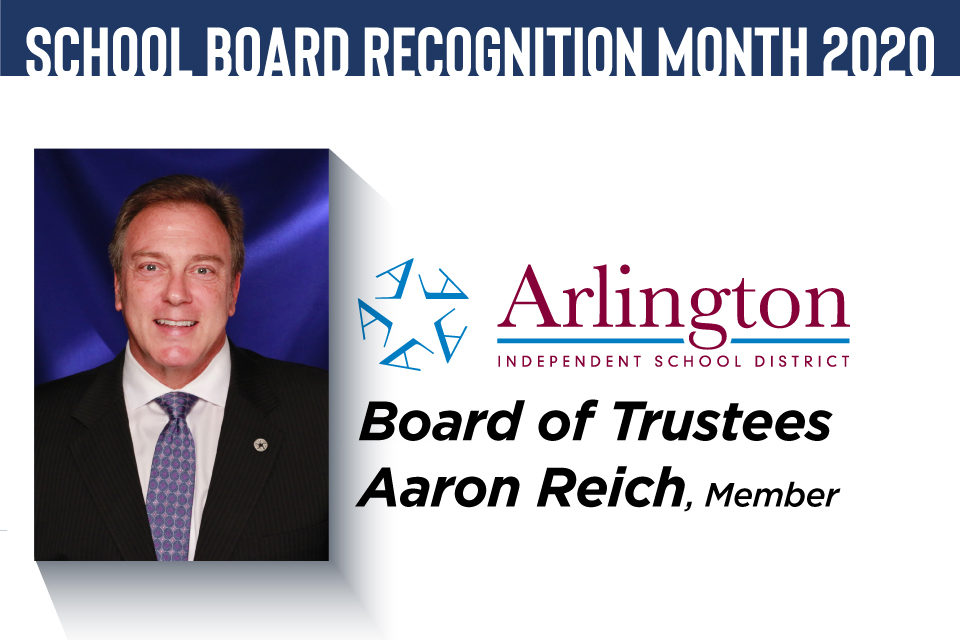 January is School Board Recognition Month, a way to honor the 7,200 locally elected school trustees in the state of Texas. This month, the Arlington ISD will help you get to know each member of our Board of Trustees a little better while thanking them for their service.

Helping to facilitate moving a child away from an abusive situation and getting them to permanent safety all within our district: Due to the extreme situation and for the protection of the student, I cannot provide any specifics.  What I can say is I sleep better knowing there is a child who is now in a loving and caring environment free to grow and pursue their dreams. Without this happening meant a certain negative outcome and harm. The moment I learned everything was going to work out moved me to my core and has permanently affected me. Thanks to God for placing me in the position to affect lives, sometimes in the most unimaginable ways.

Getting the very first strategic plan and resultant historic bond put together and passed: There was a monumental effort that came with the passage of the 2014 Bond – the most transformational vote the community ever took for the district at the time. This was derived from the development of the district’s first-ever strategic plan. It amazed me that up until then, such a large enterprise had no roadmap of where to go or how to get there. This plan brought the board and staff together and moved the district toward premier status thanks to the tremendous efforts of the teachers and admins as well as the community support.

The actual moment we won the state school board of the year: We (the board) were standing on stage at the state convention in 2014 with the other top 5 contenders for the top spot. When Arlington ISD was announced, I didn’t think I heard correctly…I couldn’t believe it was us. I’ve never had that feeling of swelling emotion like you see game show winners on TV have, but that is exactly how I felt. I will never forget looking at colleague Jamie Sullins as we acknowledged through eye contact that it was, indeed, us who won. I was in complete shock with my mouth gaping open and smiling like a child…I literally cried. It wasn’t about the winning, although that was really awesome, rather the overwhelming feeling of pride in our team, in our district, our teachers and our children and the affirmation from such a rigorous process of outside eyes looking in that we, Arlington ISD, were on the right track of creating excellence like no other in the state for our entire community.

Fine Arts Dual Language Academy kids doing Mandarin and getting surprised: During one of the events I attended the first year of the Jones Academy, I was in a classroom of kindergartners as they were waiting to be reunited with parents – lots of noise and discussions throughout the room. The teacher said something to me and, all of a sudden, all the kids went silent and turned their heads with their mouths and eyes wide open in shock. A couple of them proclaimed to the teacher, “You speak English?!” It was so cool.  The teacher was red-faced and laughed as she said that was the first time she had said anything not in Spanish. It was hilarious as well as a testimony to a great program at work!

A related great personal moment for me was the awe of walking the hallways of Corey Academy its opening year and looking at the children’s ‘works’ on the wall (kinder age) that were drawings of bodies, essentially stick figures, with the body parts labeled by their writing in Mandarin!  It was one of those, ‘Holy cow!’ moments of how much smarter those kids were than most of us and how much further they’ll go thanks to the opportunities afforded them.

Surprising and announcing namesakes and dedicating the Dan Dipert Career & Technical Center: With the 2014 Bond came the opportunity to build and name several facilities, including Sandy McNutt, Diane Patrick, and Eddy and Debbie Peach elementaries, and the Jimmy and Laura Jones Academy of Fine Arts and Dual Language. Getting to completely surprise them in a true Prize Patrol fashion, witnessing their reactions and listening to their heartfelt acceptance remarks was truly inspiring. Likewise, being able to dedicate the Dan Dipert CTC while serving as board president was an incredible honor while bearing testimony to the packed house of the true game-changer the facility will be for generations to come. The air was filled with a feeling of the district turning a pivotal corner on its path to greatness!