The Art of Painting Parking Spaces 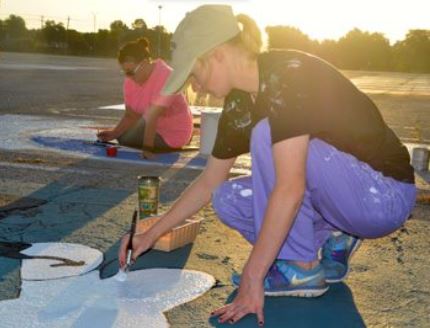 Who doesn’t like to paint? Of course, there are dog people and cat people.

She’s loved them since sixth or seventh grade.

If she wasn’t dragging her parents to the Fort Worth Zoo to see them up close and personal, she was reading about them, watching documentaries on television or videos online, or flipping through National Geographic when the feature is about the largest mammal on land.

“I just love elephants,” she said.

So it makes perfect sense that elephants are what she will see each day she drives to class at Lamar High School.

Elephants are painted on her parking lot space.

On the Saturday before the start of school, Kayla, a senior, was putting the finishing touches on the parking spot that is hers for the whole year.

Decorating parking spaces is a long-held tradition at some AISD high schools for students who drive in each day. It’s a way to personalize a space they will see daily, their own piece of decorative real estate. They often start early in the morning to beat the heat, either scraping off the previous art or just merely painting over it. Many come with their parents or friends, although some make it a one-person task.

Nick G., also a Lamar senior, painted a big Eagle Scout symbol on his space, signifying one of the achievements that makes him proud.

“I’ve been in scouting since the first grade,” said Nick, who finished his space with the help of his mother and father. “Being in the scouts was fun and getting to Eagle Scout is not something everyone is able to do.”

Like Kayla and Nick, most student parking space art is deeply personal, although some spaces are merely eye catching, such as a red and black space at Martin High School that only has the word “BAM” or the one that just shows a tuxedo shirt.

“Whatever makes you feel good or makes you remember something you want to remember, that’s what people put on their spaces,” Kayla said.

Or something they just want to grin at.

A favorite among students last year at Lamar (it had yet to be painted over) was a simple quote, “If you are reading this, I’m late for class.”

“That was clever,” Nick said.