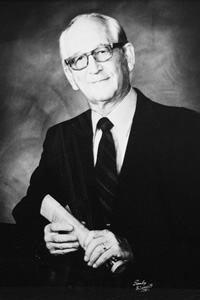 Charles W. Young, for whom our school is named, was a resident of Arlington from 1952 until his passing in 1992. He spent nearly 12 years as a member of the Arlington school board, serving from 1961-1973. During that time he was vice-president of the school board, assistant secretary, and secretary. He did not seek re-election in 1973 and retired from Lone Star Gas Company that same year, after 38 1/2 years of service.

A past president of the Arlington Chamber of Commerce and a recipient of their Citation of Service Award, Mr. Young also played an active part in the work of the YMCA in Arlington as well as the United Way and numerous other civic and cultural activities in the Arlington community. On December 9th, 1979, Charles W. Young Junior High school was formally dedicated in his honor and both he and his wife, Anne, would often volunteer their time and talents volunteering in the school library and were often seen on the sidelines of our games.