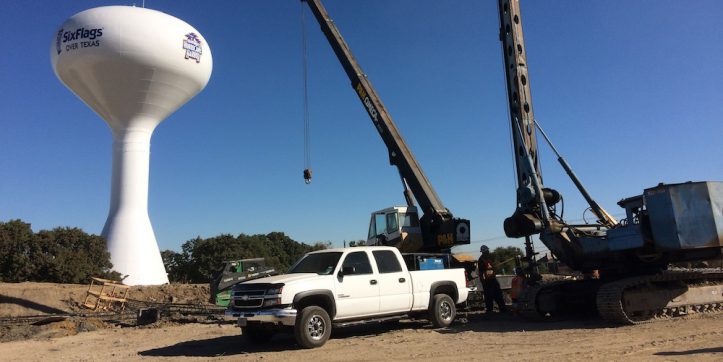 Oct. 14, 2015 - After many months of planning, the first construction projects funded by the 2014 Bond package are underway. The AISD took full advantage of the summer months to get a lot of work done at Workman Junior High, Ousley Junior High and Ferguson Education Center. These projects are just the beginning though, as all AISD campuses will receive improvements during the bond’s five-year implementation. In fact, by next summer, 44 schools will have construction projects underway or already finished. The bond is also funding several new districtwide facilities, along with two new elementary schools.

Below are a few more details about the projects currently ongoing.

Workman Junior High
While Workman Junior High is slated to receive a number of improvements, including a 16-classroom addition, a new entrance, renovated administration space and life cycle upgrades,the project for the summer was an expanded cafeteria. Hutcheson Junior High has consolidated with Workman at the Workman campus, which means the student population has grown significantly. The additional students made a bigger cafeteria essential.

Demolition of walls around the cafeteria began June 22 and wrapped up about a week later. Then the building of new walls, putting in insulation and hanging drywall started in July. Just outside the cafeteria, on either side of the library, the lockers were removed and the area is being converted into collaborative spaces – group learning areas with casual seating.

Construction in the cafeteria wrapped up in time for the start of the new school year. Some work in the kitchen continued after the start of school, but is now complete. Due to the kitchen work, food preparation for the first few weeks was done offsite at the AISD’s food services facility.

The other Workman improvements, including the 16-classroom addition (facing Arbrook Boulevard), new entrance and renovated administration space, will begin this month. The guaranteed maximum price was approved by the AISD Board of Trustees on Sept. 3, and the notice to proceed was issued the following day. Construction fencing is now up and work will begin soon. Construction will continue through the summer of 2016.

All construction at Workman is being managed by Pogue Construction, following plans designed by Brown Reynolds Watford Architects.

[See photos: Expanding Workman's cafeteria and Getting ready for construction at Workman

Ousley Junior High
Ousley Junior High is undergoing a number of projects related to life cycle upgrades and replacements, along with improvements designed to accommodate growth. The student and faculty population has grown considerably this school year since it consolidated withFerguson Junior High. While some of the projects will not be completed until 2016, the AISD raced to get most of them done over the summer so the campus would be ready when school started in August.

Some of the most high priority jobs that needed to get done over the summer were changes associated with Ousley’s growth. While the building itself is large enough, some interior changes were required. The administration offices were renovated, with walls rearranged to accommodate more faculty, including an additional assistant principal and school counselor. Another task was the division of one very large classroom into three, which required adding walls and new doorways.

Outside the building, Ousley’s athletic fields are being repositioned to accommodate a new four-lane track and sports field lighting. The track and lights should be installed in the spring of next year (2016). In addition, improvements to the campus’ landscaping are being done this month.

Construction is being managed by Pogue Construction, following plans designed by HarrisonKornberg Architects.

Ferguson Education Center
The scope of construction projects at Ferguson was not as extensive as Ousley’s, but the building did receive a number of life cycle upgrades and replacements. Ferguson Junior Highvacated the building to consolidate with Ousley, but the campus is now home to two of the AISD’s alternative schools, Newcomer Center and Venture High School.

Among the projects completed over the summer was the replacement of 20 rooftop HVAC units, along with all related controls. The water fountains were replaced, along with the stage curtain and light fixtures. The weight room was converted into classroom space and ADA accessibility was improved, which included adding grab bars in the restrooms and installing a new ADA ramp and sidewalk. Technology connectivity is also being upgraded, with additional data drops to be installed in the labs, and ID card access controls are being added. The campus is also receiving landscaping improvements and new signage.

Construction is being managed by Pogue Construction, following plans designed by HarrisonKornberg Architects. Substantial completion is planned for late fall.

Both schools will open next August for the start of the 2016-2017 school year.

The architects and construction managers held pre-construction meetings at each high school at the end of September and early October with the principals and athletic staff to share plans and schedules. The construction will require some adjustments and shuffling, and school faculty are dealing with the logistics of affected issues like parking, busing and athletic practices. Construction fencing is up and the work is beginning.

[See photos of the work at Arlington High School.]

Substantial completion of the 77,704 square feet facilities is planned for the summer of 2016, which means the buildings should be ready for use next school year. Construction is being managed by Balfour Beatty Construction following plans designed by Huckabee.

Fine Arts/Dual Language Academies: Construction coming soon
The AISD’s two new fine arts and dual language academies, Corey Academy and Jones Academy, opened Aug. 24 and are located in existing elementary schools: Corey and Roquemore. But both school buildings will receive extensive renovations to enhance the fine arts and dual language programming. The renovations will provide state-of-the-art fine arts spaces like strings rooms, piano practice rooms, drama space and dance studios. In addition, adjustments will be made to ensure there are enough classrooms so that each class – or cohort – can spend half the day in an English classroom and half the day in a Spanish classroom.

[See photos of the Hutcheson demolition]