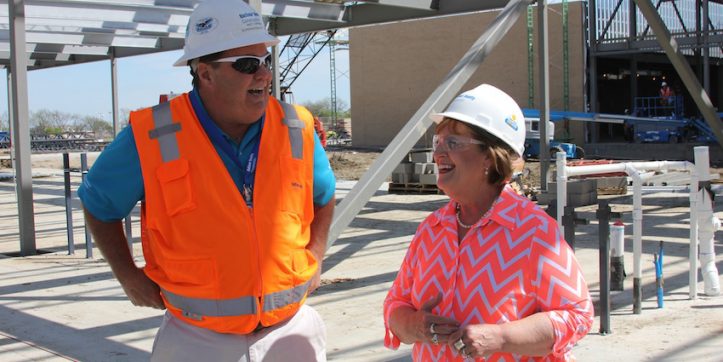 April 6, 2016 - Sandy McNutt visited and toured the construction site of the future elementary school that will bear her name yesterday. She was joined by the school's future principal, Jackeline Orsini, AISD Superintendent Marcelo Cavazos and other AISD staff, and were guided by Balfour Beatty construction supervisors and architects from Corgan.

McNutt's visit may have been her first official one, but she admitted she has visited before and drives by regularly, praying for the school and those who will go there. She has also dropped by with cookies for the construction managers.

The 112,00 square-foot McNutt Elementary, located next to Workman Junior High, is scheduled to open for the 2016-2017 school year.

Arlington ISD will offer the first series of bonds authorized through the 2019 Bond Program for sale on February 5,…
END_OF_DOCUMENT_TOKEN_TO_BE_REPLACED

January 2020 – The new library at Wood Elementary is officially open. After many months of construction, the 5,750-square-foot addition,…
END_OF_DOCUMENT_TOKEN_TO_BE_REPLACED

Wood library addition to open in JanuaryConstruction is nearly complete

Dec. 13, 2019 – Construction of the new Wood Elementary library is almost finished. The 5,750-square-foot addition, funded by the…
END_OF_DOCUMENT_TOKEN_TO_BE_REPLACED

AISD Contractor Symposium Dec. 11Learn about projects in the 2019 Bond