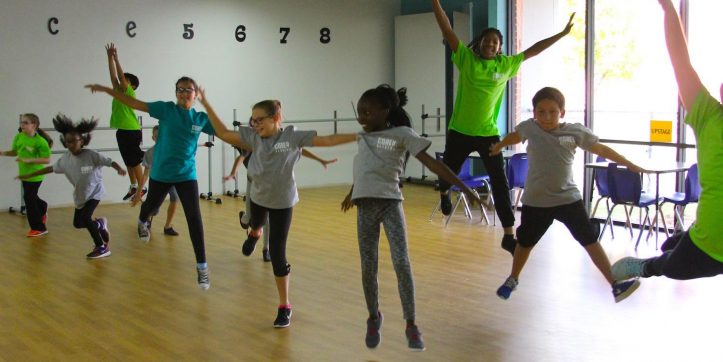 Though Corey is actually 31 years old now, the school delayed its anniversary celebration to coincide with the completion of its transformation into a fine arts/dual language academy. The building – practically unrecognizable to many alumni – underwent a year of major renovations to ensure the facility matches and enhances the school’s new fine arts and dual language programming.

The Saturday afternoon event was well-attended and included a ceremony in the cafetorium. The cafetorium’s far wall still features the mural of Mr. Corey playing flute, leading a parade of young students. Across the room and on stage, Corey Principal Matt Varnell spoke of Mr. Corey’s lasting musical legacy and fine arts impact on the AISD and welcomed Corey’s family in attendance.

Superintendent Dr. Marcelo Cavazos – recently named Texas Superintendent of the Year – and AISD Board Member Bowie Hogg also took time to honor Corey’s legacy and speak of the exciting future for the school. Then Corey’s daughter, Carolyn Corey McNellie, told the audience how much her father would have loved to have been there. She then took out her cell phone and took a picture of the audience.

The Corey Cub Chorus helped start the event with a hit from 1985, the year Corey opened. It didn’t take long for many in the crowd to join in with the familiar words from “We are the World.” The Chorus returned to the stage at the end of the program – joined by alumni members of the Chorus – and led everyone in singing the school’s alma mater.

Following the program, cake and lemonade were served and the building was open for tours. Many old friends caught up as they perused the history displays, which included old year books, photos and memorabilia. Tours of the building highlighted the newly renovated areas, including the piano lab, dance studio, black box theater, art rooms, STEM labs, extended learning areas and more.

“We have a superintendent, school board and staff that are moving our school district to new heights,” said Arlington Mayor Jeff Williams, whose three children attended Corey.

[See photos from the event.] [See photos of the Corey renovations.]
Skip back to main navigation

You might feel like you need a hard hat for this tour. Get a close-up, in-depth look at the future…
END_OF_DOCUMENT_TOKEN_TO_BE_REPLACED

Windows are going in, sheetrock is going up and the pool’s frame is in place. Check out the construction progress…
END_OF_DOCUMENT_TOKEN_TO_BE_REPLACED

Check out this virtual tour of the future Arlington ISD Arts and Athletics Complex. Great progress is being made on…
END_OF_DOCUMENT_TOKEN_TO_BE_REPLACED

Today is the 50th anniversary of Earth Day, a day designed to raise awareness about the negative impact our actions can…
END_OF_DOCUMENT_TOKEN_TO_BE_REPLACED

If you etched your name into a girls’ locker room bench at Arlington High School in the last 40 years,…
END_OF_DOCUMENT_TOKEN_TO_BE_REPLACED

When voters approved the Arlington ISD’s 2014 Bond more than five years ago, no one could have predicted the vital…
END_OF_DOCUMENT_TOKEN_TO_BE_REPLACED
Select Language