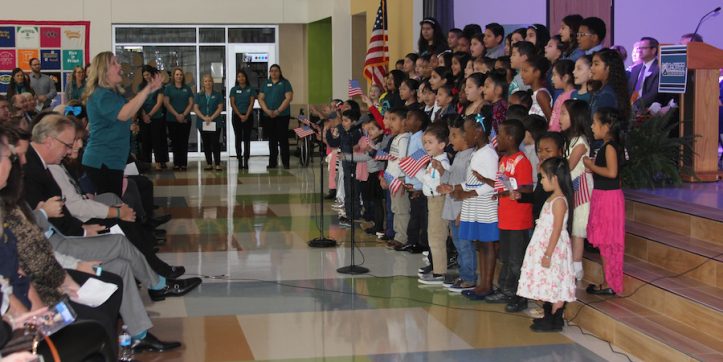 Jan. 24, 2017 - Sandy McNutt Elementary was dedicated Saturday, Jan. 21, in a ceremony that honored the school’s namesake and celebrated the school’s future impact on students. Hundreds of people filled the cafetorium for the ceremony, with many forced to watch from the hall and in the gym, where a live feed was projected on the wall.

Through the ceremony, McNutt family and former students and colleagues showered praise on Sandy McNutt. Robert Windham, a former AISD principal who hired McNutt out of college for her first AISD teaching job, called McNutt the “best teacher and administrator in the world.” Chad Conn, a former fourth grade student in McNutt’s class in the 1980s, called her his “sunshine.” Everyone who spoke highlighted McNutt’s smile, relentless positivity and lasting impact on literally thousands of people, from her schools, church, family and community.

After the ceremony, cake was served and teachers opened their classrooms for tours. Sam Houston High School's drumline and cheerleaders performed on the learning stair, while mascots, including the McNutt Mountain Lion, Rowdy from the Dallas Cowboys, Captain from the Texas Rangers and Clifford the Big Red Dog, entertained the children. 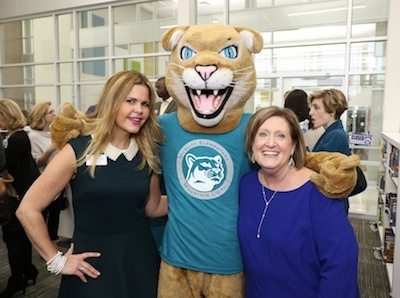 [See more photos from the dedication.]

The 112,000 square-foot school, next door to Workman Junior High, has a 900-student capacity with 44 general classrooms, eight collaborative areas, two STEM labs, art room, strings room, music room, parent room and media room. It also has two playgrounds, one for younger students and one for older.

McNutt Elementary opened in August 2016, one of two new elementary schools funded by the 2014 Bond program. The building was designed by Corgan Architects and constructed under the management of Balfour Beatty Construction.

You might feel like you need a hard hat for this tour. Get a close-up, in-depth look at the future…
END_OF_DOCUMENT_TOKEN_TO_BE_REPLACED

Windows are going in, sheetrock is going up and the pool’s frame is in place. Check out the construction progress…
END_OF_DOCUMENT_TOKEN_TO_BE_REPLACED

Check out this virtual tour of the future Arlington ISD Arts and Athletics Complex. Great progress is being made on…
END_OF_DOCUMENT_TOKEN_TO_BE_REPLACED

Today is the 50th anniversary of Earth Day, a day designed to raise awareness about the negative impact our actions can…
END_OF_DOCUMENT_TOKEN_TO_BE_REPLACED

If you etched your name into a girls’ locker room bench at Arlington High School in the last 40 years,…
END_OF_DOCUMENT_TOKEN_TO_BE_REPLACED

When voters approved the Arlington ISD’s 2014 Bond more than five years ago, no one could have predicted the vital…
END_OF_DOCUMENT_TOKEN_TO_BE_REPLACED
Select Language