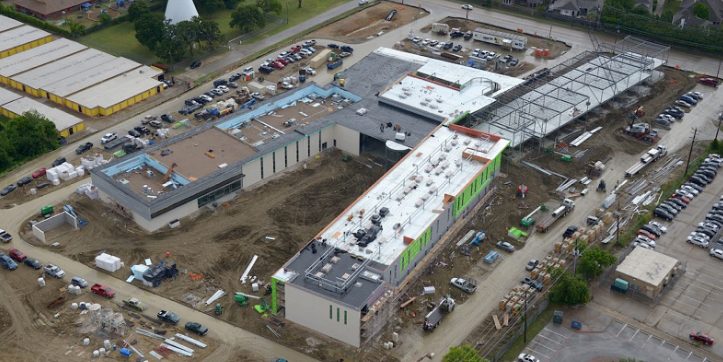 Bond-related construction is in full-swing. In fact, by the fall, 51 schools will have construction projects underway or already finished. The bond is also funding several new districtwide facilities, along with two new elementary schools.

Boles Junior High
Construction at Boles will begin as soon as permits from the city are secured. Boles will receive a new special education suite within the existing building. The suite will include four special education classrooms, a mock apartment (ADL Room), motor lab, ISPD classroom, PAES/Prevoc room, ABLE room and conference room. Three restroom banks will also be renovated to comply with ADA.

The addition of the new suite will require the relocation of existing classrooms. To make space, Boles will receive a new addition that will include a computer lab, an art room with support spaces and three CTHEI classrooms.

Construction of the addition will begin first. Once complete, the special education suite will be built.

Construction at Boles is being managed by Pogue Construction, following plans designed by Stantec Architects. The project is scheduled to be complete in late spring 2017.

The future districtwide CTC is being built on the site of the former Hutcheson Junior High. Hutcheson closed at the conclusion of the 2014-2015 school year and demolition of the building reached 100 percent completion in early 2016.

Now construction of the new 169,800 square-foot building is underway. Piers are being drilled, grade beams poured and utilities installed. The rough-in for the underground electrical conduit and the rough-in of sanitary sewer under the building are also underway.

Construction of the CTC is being managed by Balfour Beatty Construction, following plans designed by VLK Architects. The building is scheduled to be complete in the summer of 2017.

[See photos of the Hutcheson demolition, the CTC groundbreaking and CTC construction. Learn more about the future Career and Technical Center.]

The school is receiving extensive renovations to enhance the fine arts and dual-language programming the new academy offers. The renovations will provide state-of-the-art fine arts spaces like strings rooms, piano practice rooms, drama space and dance studios. In addition, adjustments will be made to ensure there are enough classrooms so that each class – or cohort – can spend half the day in an English-speaking classroom and half the day in a Spanish-speaking classroom.

While school was still in session, the work was limited to just a portion of the building and focused on the music, dance and art rooms. In the music rooms, three layers of sheetrock were installed, along with special acoustical caulk, to soundproof the area. Many of these rooms are now nearing completion.

Now that school is out, most of the building is receiving major renovations. A lot of demolition is being done as the building will be reconfigured to better suit the academy’s programming. Depending on the area of the school, different tasks are underway, including demolition, plumbing rough-in, electrical rough-in, ductwork installation, wall framing and more. In the gym, painting is underway.

[Click here for more information about Corey Academy of Fine Arts and Dual Language. See photos of the construction.]

Jones Academy
Jones Academy of Fine Arts and Dual Language opened in August 2015 in the Roquemore Elementary building. Now that the first school year is complete, renovations on the building have begun.

The school is receiving extensive renovations to enhance the fine arts and dual-language programming the new academy offers. The renovations will provide state-of-the-art fine arts spaces like strings rooms, piano practice rooms, drama space and dance studios. In addition, adjustments will be made to ensure there are enough classrooms so that each class – or cohort – can spend half the day in an English-speaking classroom and half the day in a Spanish-speaking classroom.

Construction is being done in three phases and will conclude in the spring of 2017. The first phase began in earnest on June 6, with demolition in areas of the building that will be renovated over the summer, including the admin area, cafeteria, gym and some classrooms. Structural improvements are also being made to improve and lengthen the life of the building, and exterior renovations will enhance the building’s appearance.

Construction has also started on an outdoor performance area adjacent to the building. The first of its kind in the AISD, the amphitheater will provide additional performance opportunities for students attending the fine arts and dual language program and include the possibility for amplified sound. Fencing around the site is up and the subgrade dirt work is underway. Completion is scheduled for November.

Construction at Jones is being managed by Joeris Construction, following plans designed by Stantec Architects. The project is scheduled to be complete in the spring of 2017.

McNutt Elementary
The site of the future Sandy McNutt Elementary, located next to Workman Junior High, is extremely busy. Rain has caused delays, but now with drier weather, rapid progress is being made on the new building.

In addition to all the rain, a hard rock boulder layer underground made drilling piers more difficult than originally expected. But more powerful rigs were brought in and the piers were all successfully drilled and poured. The building went vertical in February, first with masonry in the gym, strings- and music-room area, and then structural steel started on Feb. 22.

The building is divided into different areas, with each area in a different phase of construction. Depending on the area, current work includes brick masonry, MEP (mechanical, electrical and plumbing) rough-in, roofing, interior and exterior framing, drywall, and kitchen equipment installation.

The construction of McNutt is being managed by Balfour Beatty Construction, following plans designed by Corgan. McNutt is scheduled to open in August for the start of the 2016-2017 school year.

The building permits were obtained for all six sites on Nov. 2, 2015, and work started shortly after. Though all six are being built simultaneously, each is moving at a slightly different pace. While all the rain slowed things down, great progress is being made on each one.

Substantial completion of the 77,704-square-foot facilities is planned for August and September of 2016, which means the buildings will be ready for use next school year. Construction is being managed by Balfour Beatty Construction, following plans designed by Huckabee.

Arlington High School
At the Arlington High School site, which is the farthest along of the six, erecting structural steel for the metal building began in January and sheathing for the field area was completed in March. The metal roof deck and miscellaneous perimeter metal work were completed in April. While some work continues on the exterior, most of the ongoing tasks are inside. The synthetic turf is being installed in the field area. In the locker room area, work includes painting and installing door hardware, millwork, plaster ceilings, the elevator and flooring. [See construction photos and photos from the air.]

Lamar High School
Steel erection at Lamar began at the beginning of March and now the large building is visible from Interstate 30. Among many ongoing tasks, current work includes painting and installing athletic partition supports, the fire sprinkler system, ductwork, the vapor barrier and miscellaneous steel. Roofing is starting as well. [See construction photos and photos from the air.]

Martin High School
Steel erection at Martin began at the beginning of March and now the large building towers next to the football field. Among many ongoing tasks, current work includes metal building trim, MEP rough-in, painting, interior framing and masonry. Work is also being done on the Martin outdoor practice fields, including excavation and grading. [See construction photosand photos from the air.]

Seguin High School
Steel erection at Seguin began at the beginning of March. Now work continues with MEP rough-in and installation of overhead duct, gas, water and insulation. Masonry, roofing and painting are also ongoing. [See construction photos and photos from the air.]

Eddy and Debbie Peach Elementary
Construction of Peach Elementary, in north Arlington on Baird Farm Road, is now racing along. All the rain earlier in the year made it difficult to stay on schedule, but with the recent dry weather, construction is now progressing rapidly.

Construction of a new school building is a fluid process, with different areas of the building in different stages of construction. The Peach site is full of activity as many different aspects of construction are concurrently ongoing. Among the many current tasks are plumbing and electrical work, wiring, tiling, sheetrock, sheathing, roofing, bricking, and water proofing. There is also installation of light fixtures, storefront windows and metal panels.

The construction of Peach is being managed by Balfour Beatty Construction, following plans designed by Perkins+Will. Peach is scheduled to open in August for the start of the 2016-2017 school year.

Ousley Junior High
All building-related construction at Ousley Junior High is now complete, with most of it done last summer. All that remains is work on Ousley’s outdoor athletic field, which started this spring and is ongoing. The football field is being repositioned and getting new bleachers and a new four-lane track. The field will also receive sports lighting.

The completed work at Ousley included a number of projects related to life-cycle upgrades and replacements, along with improvements designed to accommodate growth. The student and faculty population has grown considerably since it consolidated with Ferguson Junior High in 2015. The AISD raced to get most of the projects done over last summer so the campus would be ready when school started in August 2015.

The high-priority jobs completed last summer were changes associated with Ousley’s growth. While the building itself is large enough, some interior changes were required. The administration offices were renovated, with walls rearranged to accommodate more faculty, including an additional assistant principal and school counselor. Another task was the division of one very large classroom into three, which required adding walls and new doorways.

Workman Junior High
Workman Junior High is getting a 16-classroom addition, new entrance, renovated administration space and life-cycle upgrades. The additional classrooms are being added because of an expanded student enrollment since it consolidated with Hutcheson Junior High in 2015-2016.

Building permits were received Oct. 28, 2015, and work began shortly after. Large amounts of rain slowed things down a bit, but steady progress is being made. The drilling of piers for the classroom addition was completed in January, the last of the grade beams were poured in February, the slab was poured in March, and then the structural steel was erected. Current work in the addition includes roofing, sheetrocking, fur down framing and glass installation.

On the north side of the building, construction of the new entrance and renovated admin space is ongoing. Also inside the building, demolition related to life-cycle and deficiency upgrades is underway, and two areas outside the library that formerly served as locker banks are being converted into eight classrooms. Outside, much of the parking lot is being demolished and will be replaced.

In addition to the work currently underway, Workman’s cafeteria was expanded last summer and the kitchen was upgraded with new equipment.

[See photos of the addition construction, admin area renovation and the expanded cafeteria.]