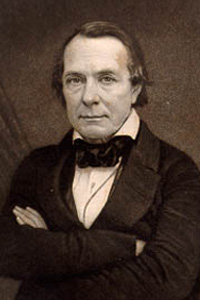 Mirabeau Buonaparte Lamar (August 16, 1798 – December 19, 1859) was a Texas politician, poet, diplomat and soldier who was a leading Texas political figure during the Texas Republic era. He was the second President of the Republic of Texas after David G. Burnet (1836 as ad-interim president) and Sam Houston.

Lamar has been called "the Father of Texas Education" because of his provisions of land to support it. During his administration, he convinced the legislature to set aside three leagues of land in each county to be devoted to school development. He also allotted 50 leagues of land for the support of two universities, later developed as Texas A&M University (1876), under the Morrill Act, and the University of Texas (1883). Although no facilities were constructed during his term, he provided the base for a statewide public school system.