To empower and engage all students to be contributing, responsible citizens reaching their maximum potential through relevant, innovative and rigorous learning experiences.

To be nationally acknowledged as a premier Title I school. 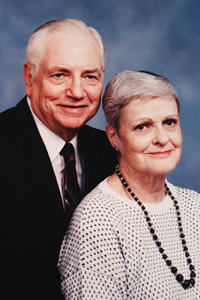 James and Maydelle Crouch served a combined 55 years in public education. After graduating from Texas Agricultural and Mechanical College with a degree in marketing and finance, Mr. Crouch served with the U.S. Quartermaster Corps in World War II. After the war, he worked as a dairy farmer and dairy specialist before entering the classroom in 1958 at Arlington High School as a math teacher. He later earned his master's degree from Texas Wesleyan College.

Mr. Crouch was named Father of Distributive Education in Arlington in 1963 and Outstanding Texas School Administrator by the Texas Classroom Teachers' Association in 1977.