Mary Moore Elementary is dedicated to providing individual success for every learner within a challenging and diverse curriculum.  Our high expectations for academic achievement are balanced with experiences that assist learns in creating a framework for problem-solving and decision-making, which will enable them to adapt to a changing world.  Our school climate is child-centered and promotes the development of self-motivated, independent lifelong learners.  Our goal is to collaborate with parents, students, local businesses, and our community to deliver measured results for each learner within a system of continuous improvement. 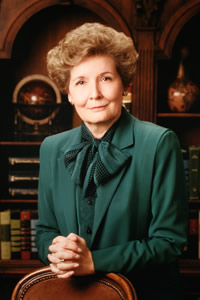 Mary Moore Elementary opened its doors in August of 1990.

The school is named after Mary Moore, a pioneer in the field of educational administration.

Mary Mosley's first teaching assignment was at the Y&O coal mining camp in 1948 in her native West Virginia.

Mary was famous for making a difference at lunchtime. While teaching in West Virginia, Mary visited her students' homes during lunch. In later years while teaching in Arlington, an apple and an orange were familiar fixtures on Mary's desk since she used her lunch hour to help her math students.

Mary married Guy Moore in 1953, and the family moved to Arlington in 1960. She was hired by AISD assistant superintendent Woodrow Counts to teach math at Nichols Junior High in 1962 after she graduated from Texas Wesleyan College. She soon became math department chair at Nichols. During her eight years at Nichols, Moore was twice named Teacher of the Year.

Moore next went to the new Lamar High School, where she helped to develop the innovative EMH (English-Math-History) team approach to teaching. She sponsored Lamar's Student Council, and in 1977, she completed a master's degree and was once again named Teacher of the Year.

In what she called "the most rewarding time" in her career, Moore became the first female principal of a secondary school when she took the helm at Bailey Junior High in 1985. In 1986, she became Director of Personnel for the AISD.

Moore retired in 1988, and Mary Moore Elementary had its formal dedication on November 4, 1990.

Mary and her husband, Guy, reside in Arlington.