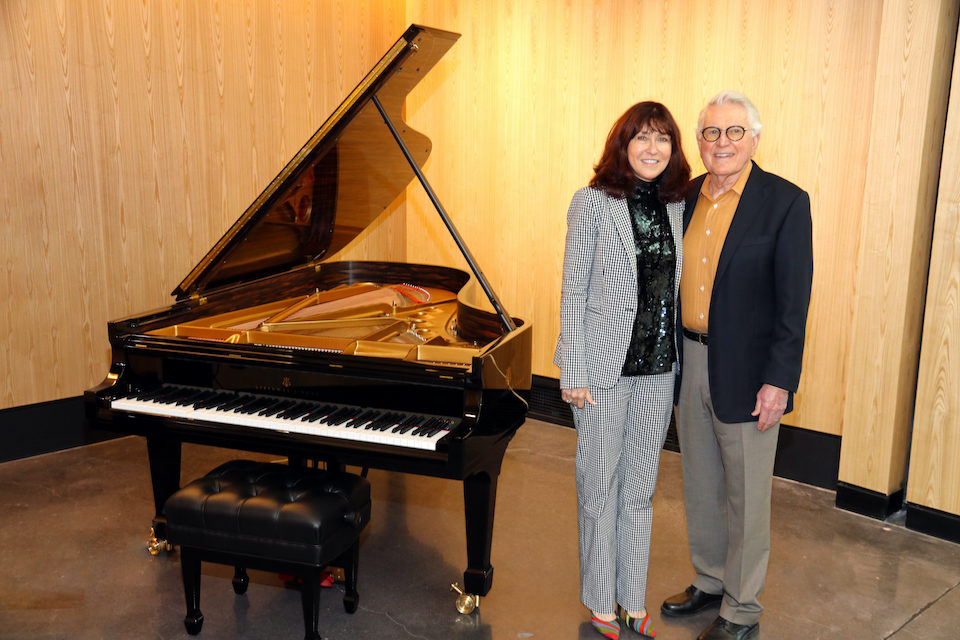 The Arlington ISD’s new Center for Visual and Performing Arts was filled with the sounds of two professional Steinway pianists today as they played a rousing duet, four hands masterfully flying across the keyboard.

But the pianists weren’t at the CVPA. They were in New York, and a screen showed the performance on video. But the sound was live and came from the Steinway & Sons Spirio player piano, the keys dancing in perfect sync with the pianists’ fingers thousands of miles away.

This was the christening of sorts for the district’s two new Steinway pianos, a Spirio B in the lobby and a Spririo-R D in the concert hall.

Dan and Linda Dipert, who donated the Spirio B, came to hear the piano for the first time – and see its incredible new home, the CVPA, which opened earlier this year and was funded by the 2014 Bond.

The donation from the Diperts is yet another example of their lasting support. Dan Dipert, a former district trustee, is also the namesake for the Arlington ISD Dan Dipert Career & Technical Center.

“Dan is a great friend of the district,” Superintendent Dr. Marcelo Cavazos said. “He decided he wanted to do something special for this fine arts center back when it was approved as part of the 2014 Bond. And this is really special. It’s going to have an impact on countless fine arts students for years to come.”

For Dipert, it’s about our local students and the lasting impact music has on all of us.

“Music has something to do with all of our lives. It lives forever,” Dipert said. “I want a child to play this every day.”

Arlington ISD is now the first and only school district in the country with both a Steinway Spirio B and the larger Spirio-R D piano, which can record performances.

The new pianos have been described as “not your momma’s player pianos.” The world’s finest high-resolution player piano, the Spirio is not only a fully functioning world-class instrument, it’s also an amazing piece of technology. It can mirror a live or recorded performance from anywhere in the world. A live recital in Carnegie Hall, for example, can play in real-time on either of these pianos in the CVPA.

“In an entire career of working with Steinway pianos, this is physically one of the most beautiful instruments I’ve ever seen,” said Dr. Christopher Anderson, Arlington ISD director of fine arts. “It’s a work of art.”

Above all else though, the most exciting thing about the Spirios is how they will benefit students. Students will get the opportunity to play and perform on a world-class piano in a state-of-the-art venue. Plus, with the player functionality, students will experience live and recorded performances by professionals from New York or anywhere in the world. It will also allow for professional pianists to teach masterclasses remotely to students. And that’s just the beginning.

Back in 2018, the Diperts and a contingent of Arlington ISD administrators, fine arts staff and students visited the Steinway plant in New York and saw the piano being built. They even got to sign their names on boards used in the construction. (See photos.)

“What was striking in New York when we visited the Steinway factory was that this was made with loving hands – literally,” Dipert said. “It’s done by craftsmen and women by hand.”

And it takes about 18 months to build.

After that, the pianos were shipped to Texas in airtight containers and arrived at Steinway Dallas in January of 2020. In November of last year, the containers were opened so the pianos could acclimate to DFW weather before ever being played.