Working to Keep our Students and Staff Safe

A clear plan makes all the difference. 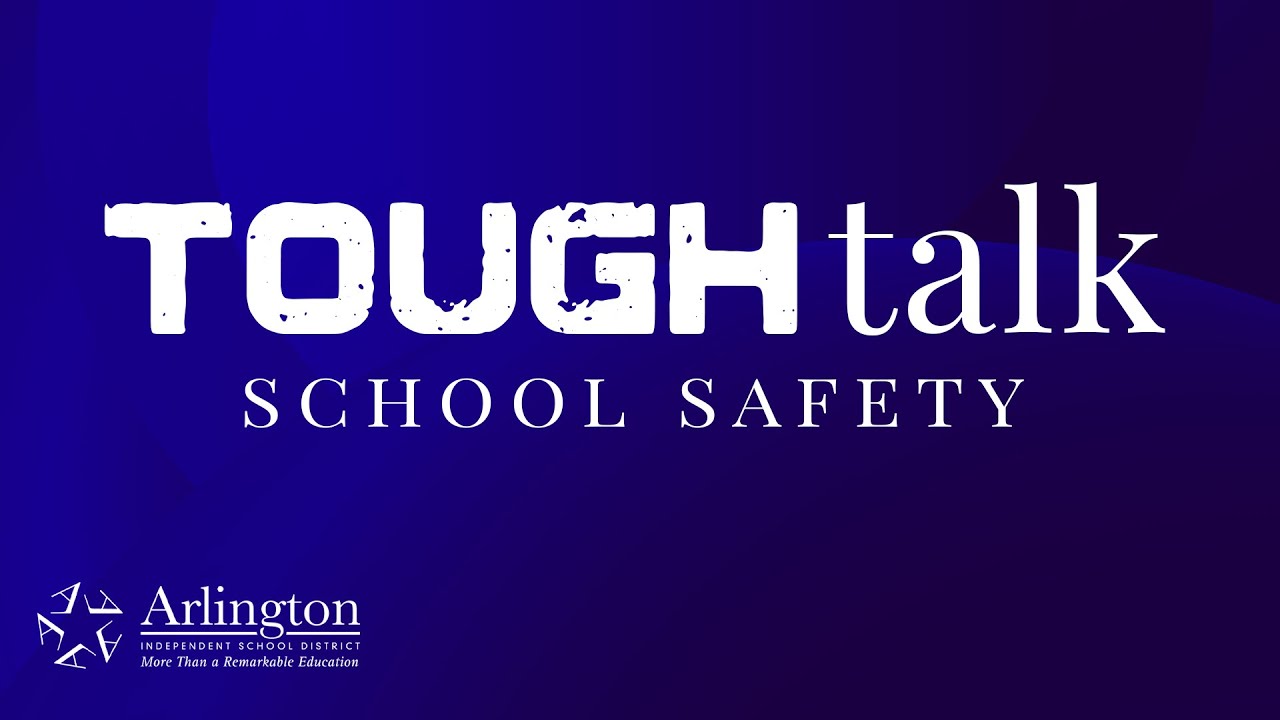 In the event of an emergency, clarity is key.

A LOCKDOWN is when there is a direct threat or hazard to people or school property. From parental custody disputes to intruders to an active shooter, Lockdown uses classroom and school security actions to protect students and staff from threats.

What students and staff hear:

"We are in lockdown. Use the LACE / Lock protocol to lockdown in the nearest safe place."

There is a person causing a severe safety threat on the property.

There could be a report of an armed intruder or any person who is posing a possible direct threat to the campus and the students, staff and visitors present.

Arlington ISD Security and local law enforcement will work together to identify and contain the threat as fast as possible.

Understand that telephones at the school or location will go unanswered. Staff are in lockdown for their protection and will not answer phones. Look for updates by text message, email, the campus Facebook page or the Security Tracker. The scene is unsafe. Stay a safe distance away and wait for instructions from the district and law enforcement.

SHELTER is when there is a threat or hazard outside the school building. Whether it's due to police activity in the immediate neighborhood, or a dangerous animal on the playground, Shelter uses the security of the physical facility to act as protection.

"There is a safety threat outside the facility."

There is police activity in the area; there is a barking dog on the playground; there is a suspicious vehicle parked near the football field.

The situation does not currently pose a known threat as long as students, staff and visitors are inside the building.

Get all students, staff and visitors inside the building, lock all doors from the inside, monitor the situation and send notifications to families and staff.

The National Weather Service has issued a tornado warning for Tarrant County.

A Tornado or Severe Thunderstorm WARNING means that the hazard has been spotted or is indicated on radar.

Arlington ISD staff, students and visitors will move to the safest locations within each facility affected by the warning and take cover until the severe weather passes. We will notify families when, where and how to pick up students as quickly as possible after the storm has passed.

Take shelter in the nearest safe location, away from windows and on the ground ﬂoor if possible. Know that school personnel are getting your kids to safety. Do not drive to the school as vehicles are unsafe during severe wind, hail and flooding events. Look for updates by text message, email, the campus Facebook page or the Security Tracker.

"There's a potentially hazardous situation outside of the facility."

A train or large truck carrying chemicals is involved in an accident and there is a release of dangerous substances that ﬁrst responders have deemed a threat to public safety.

First responders have declared that the area outside of the facility is not safe at that time. No one will be allowed to leave the facility, or enter it from the outside.

Students, staff and visitors will shelter in place within each facility and Arlington ISD Facility Services will close off the outside air to the facility and remain in constant communication with Arlington Fire officials for further instructions.

Stay away from the facility and look for updates by text message, email, the campus Facebook page or the Security Tracker.

Any of the above types of emergencies could result in delays in the normal drop-off or release schedule for a campus. We will provide frequent updates to families with schedule changes and drop-off or pick-up locations.

In The Event Of A Lockdown

Our top priority is always protecting your child. Below you'll ﬁnd our LACE Threat Response Matrix plan that students and staff follow during a lockdown. 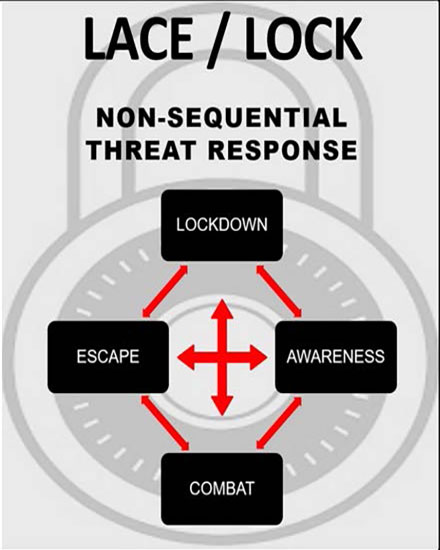 Call 911 once you're in a safe place to report the emergency.

When A Serious Threat Occurs

Our LACE Threat Response Matrix ensures everyone is on the same page. In an emergency, it can be challenging to think clearly and know what to do next.

The plan helps staff, students and visitors know what to do, when to do it and where to go.

After the threat passes, Identify and move to meeting locations

Because things move quickly during emergency events, we cannot share in advance where everyone should go after the emergency has passed. We know this information is critical so our only goal will be to communicate a meeting location to you as quickly as possible.

As soon as it's safe, we will do everything we can to get you and your child reunited quickly. We will communicate the location, what you need to bring, where to report and anything else you need to know so you and your loved one can be reunited. Follow all instructions from law enforcement.

In a crisis, accurate information matters.

We are in constant contact with our local Police Departments' command staffs, and we will relay that information directly to the families of our students.

We will verify information from multiple sources so rely on us to relay information as soon as we get it directly from our local police departments.

What type of communication can you expect if a LOCKDOWN is issued?

We will communicate with parents via text message and email. The same information will be shared on the campus Facebook page, Arlington ISD App and Security Tracker.

What type of communication can you expect if SHELTER is issued?

We will communicate with parents via text message and email.

Where can you find updates during severe weather emergencies?

Should I head straight to the school in an emergency?

While we understand you feel your place is with your child/children, your presence at the school will only take resources away from protecting your student(s), or placing you in harm's way. Please allow local first responders to handle the situation to restore safety as soon as possible and await confirmation on the reunification process from a safe distance away from the school.

What kind of emergencies are we talking about?

When it comes to your child's safety,
we rely on the experts.

The main goal of the MTAT is to promote a safe school environment by:

Arlington ISD's Security Department Command Staff is comprised of the director, security specialist and two security lieutenants. Each of the Command Staff members has over 25 years of security and emergency response experience. An additional 130 security guards are positioned across the district.

From the Arlington ISD Director of Security: 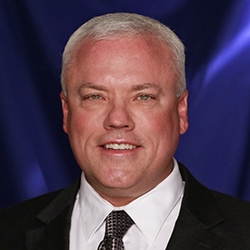 Welcome to Arlington ISD. I’m David Stevens, your Director of Security for the district. As a father of two, I understand your concerns about the safety of your kids while at school. Our primary goal is to provide everyone a safe and positive learning environment.

I draw upon more than 25 years of law enforcement experience to help our district provide the best practices possible to meet our goal of providing a safe environment. I retired from the Arlington Police Department (APD) to join the district. In my last assignment, I served as the Youth Services commander, encompassing the School Resource Officer (SRO) program and other youth-related community education and crime prevention programs.

The Arlington ISD Security command staff and the APD SRO command staff have worked hand in hand to create a comprehensive threat response and prevention program. Our LACE/LOCK non-sequential threat response matrix is derived from the practices Arlington ISD has had in place for many years, which helps ensure your kids are familiar with our procedures that were developed based on case studies of active threat situations across the country. We regularly review our emergency procedures to ensure they meet the Texas School Safety Center requirements and best practices.

We also employ the “See Something Say Something” campaign, Campus Crime Stoppers and STOPit reporting systems for your kids to anonymously report any issues or concerns. We utilize our Multidisciplinary Threat Assessment Team (MTAT) to work with the Campus Threat Assessment Team (CTAT) at each campus to ensure any threshold-activated incidents are investigated, addressed and monitored.

Thank you for trusting Arlington ISD for your child’s educational needs. Together, we can make a difference.

From our partners at the Arlington Police Department 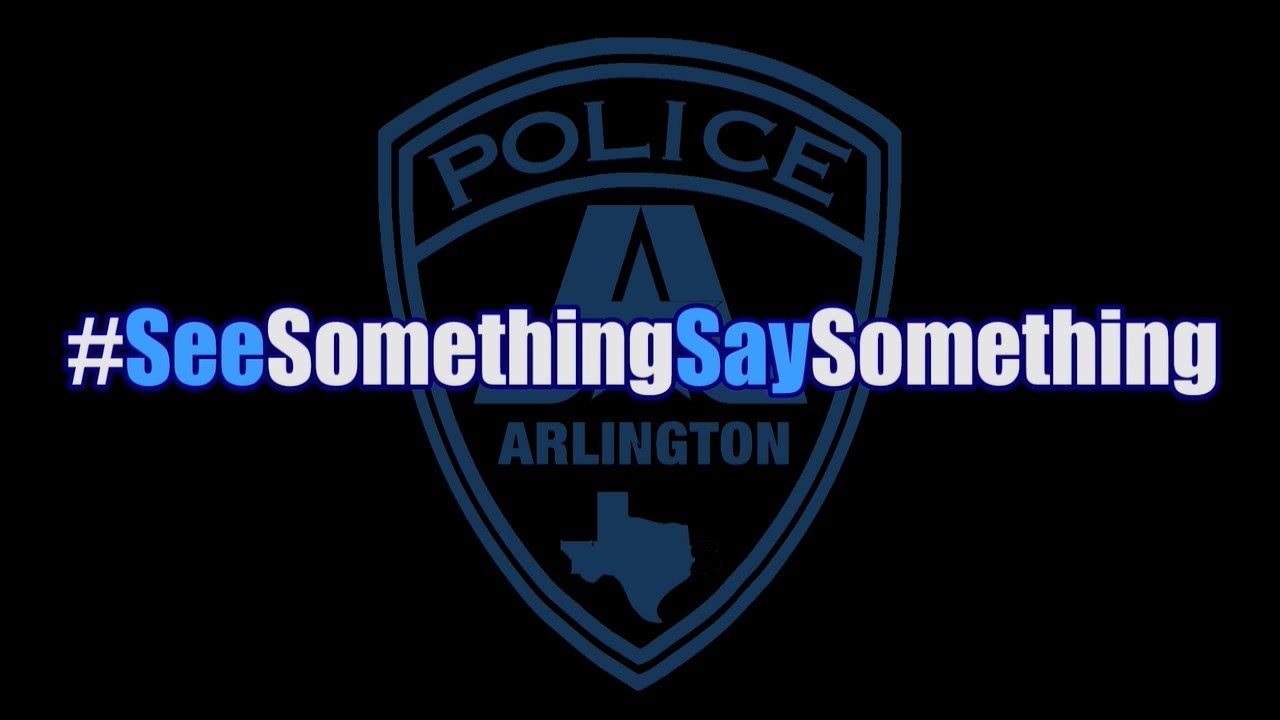 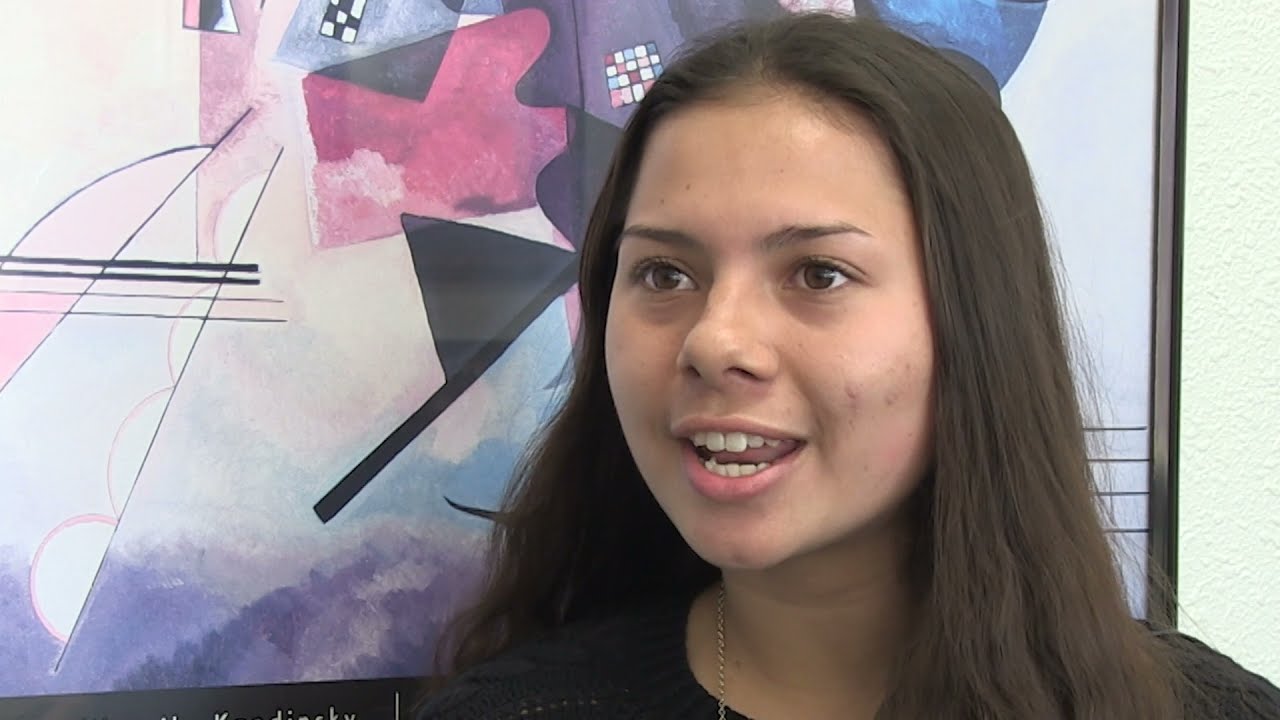 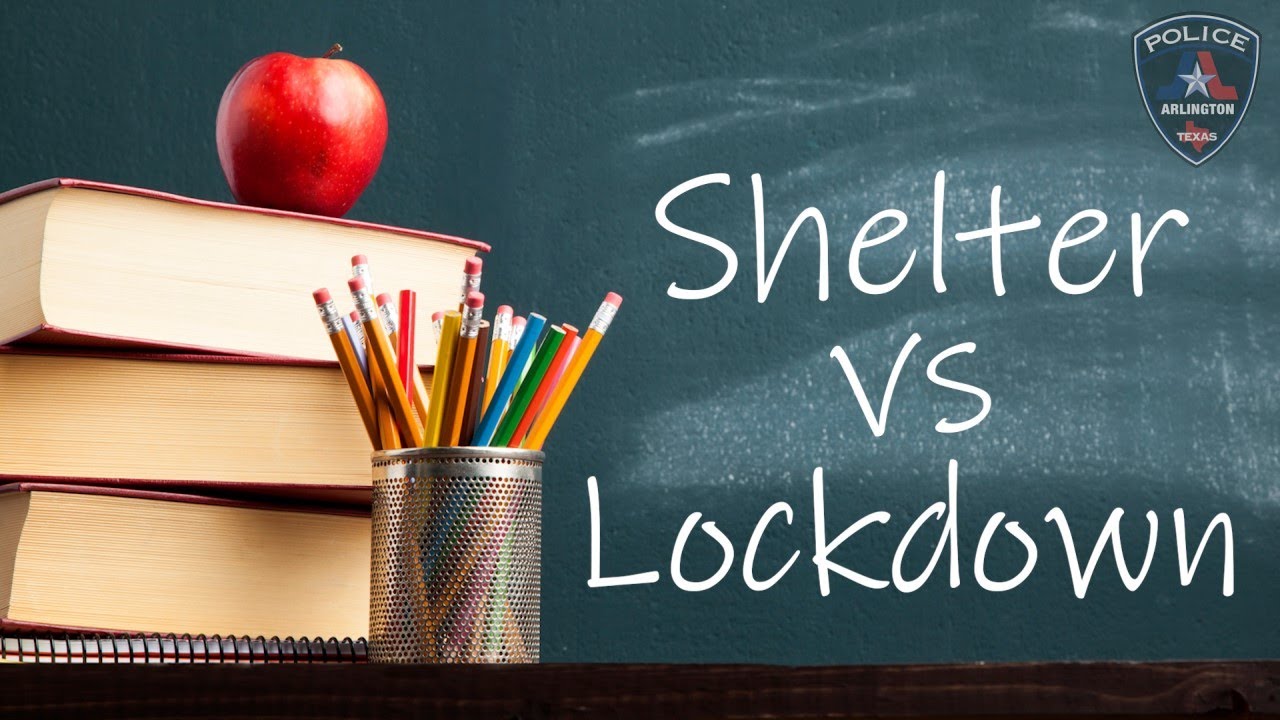 At Arlington ISD, the safety of every student matters to us. One aspect of keeping students safe is doing all we can to ensure no student experiences bullying on school premises. If bullying occurs it should be reported.

Bullying is defined as engaging in written or verbal expression, expression through electronic means, or physical conduct that occurs on school property, at a school-sponsored or school-related activity, or in a vehicle operated by the district and the Board of Trustees or the Board’s designee determines that the behavior:

Cyberbullying is defined as the use of any electronic communication device to engage in bullying or intimidation.

Harassment is defined as repeated threats to cause harm or bodily injury to another student, engaging in intimidating conduct, causing physical damage to the property of another student, subjecting another student to physical confinement or restraint, or maliciously taking any action that substantially harms another student’s physical or emotional health or safety.

Sexual Harassment means to repeatedly engage in unwelcome sexual advances, requests for sexual favors, sexually abusive or vulgar language or other verbal, visual or physical conduct if such conduct with a student or staff creates an intimidating, hostile or offensive school environment.

Dating violence is the intentional use of physical, sexual, verbal or emotional abuse by a person to harm, threaten, intimidate or control another person with whom the student has or has had a dating relationship, as defined by §71.0021 of the Family Code.

How to Report Bullying

What should a student do if they believe they are being bullied (including cyber bullying), sexually harassed, or are a victim of dating violence?

The student should immediately notify appropriate school personnel, which would include a classroom teacher, a counselor or an administrator of any such behaviors, in accordance with district policy FFH (Local). There is also an option to report bullying anonymously by calling Campus Crime Stoppers of Tarrant County at 817-469-8477 or online at www.469tips.com.

You can also report anonymously using the STOPit website. Users can download the STOPit app from the App Store or Google Play.

Learn more about our
Anti-Bullying Efforts

See Arlington ISD Board of Trustees Policies FFH and FFI for detailed information.

Learn more about what kids, teens and adults can do about bullying at www.stopbullying.gov

We can't guarantee there will never be an emergency during your student's time at Arlington ISD.

But we can guarantee that we have plans and strategies to keep your student safe and to communicate with you.

Thank you for partnering with us as we work together to keep our students safe. 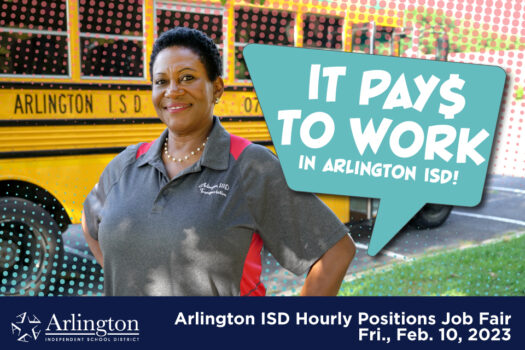 Job fair is 4-7 p.m. If you’re looking for an excellent way to start a weekend, how about doing it ... 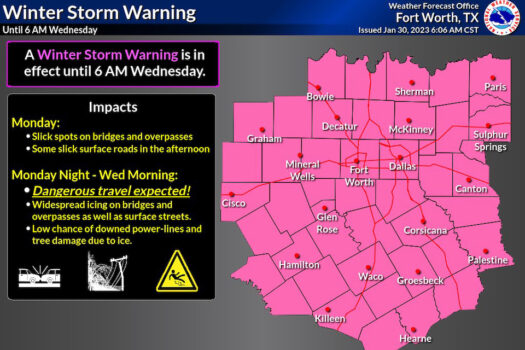 Be ready for winter weather in Arlington ISD

Winter weather is impacting the Arlington ISD this week, and we want you to be ready. Here are three tips ... 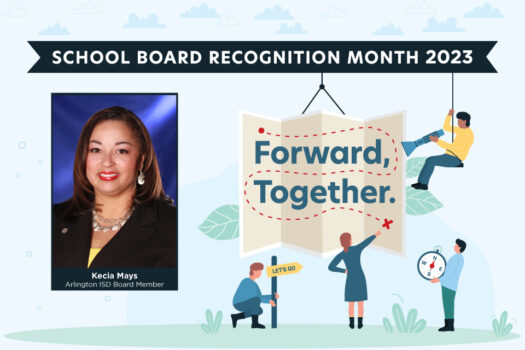 Q&A with Trustee Kecia Mays January is School Board Recognition Month, and this year's theme is Forward, Together. The Arlington ISD ... 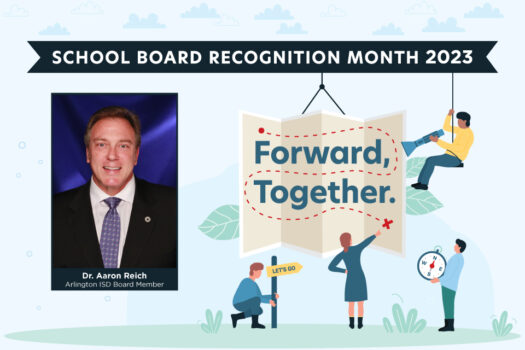 Q&A with Trustee Dr. Aaron Reich January is School Board Recognition Month, and this year’s theme is Forward, Together. The ...
Select Language
Scroll To Top