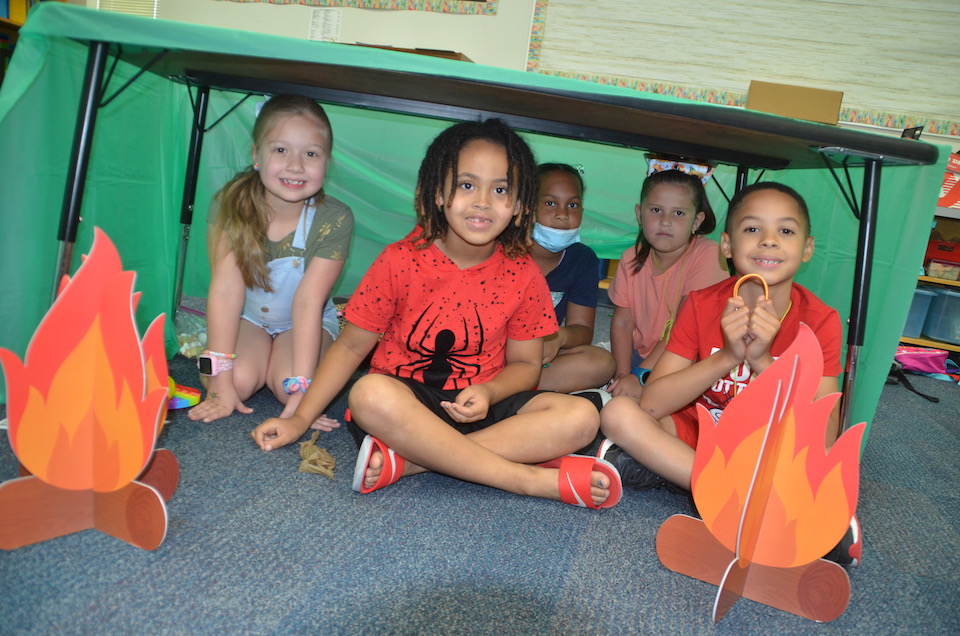 It’s not every day a student gets to practice mathematical strategies huddled under a tent next to a roaring fire while still inside the classroom. Or have the principal show up to school in a Camp Life T-shirt, baseball cap and backpack with a large water bottle dangling from one side and a flashlight from the other, looking as though she’d just returned from hiking the Himalayas.

Welcome to Summer Learning at Amos Elementary, where the core curriculum falls somewhere between established academics and summer camp. Especially on Fridays.

Those days are set aside as Celebration Fridays because they offer up fun-filled, end-of-the-week assemblies where students get a chance to show and tell what they learned during the week, earn awards and win prizes like snap-on wrist bracelets and fuzzy pens.

Each week is wrapped around a distinctive theme, such as Around the World Travel and the Beach.

Last week’s theme was Outdoor Adventures, which explained the tents (tables draped with covers) and roaring fires (cardboard cutouts) and during the festive assemblies, songs and games about roaming bears. 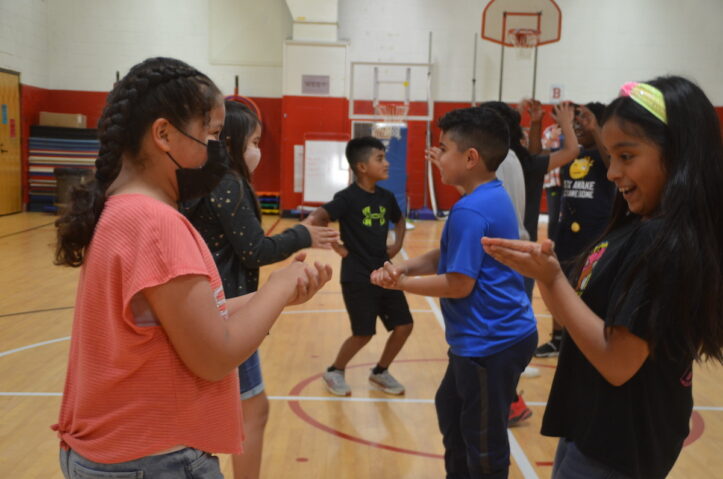 It also explained the outdoor attire of summer principal Andrea Powers, who turns out is just as energetic as the pre-K to sixth graders she and her fellow teachers are serving at three-week increments this summer.

With this week off, the teachers and students, which also includes students from Goodman Elementary, return on Tuesday, July 6 for the final three-week session.

Powers, whose regular job is dean of instruction at Berry Elementary, said the objective behind Summer Learning at Amos is to help fill in the learning gaps widened by the pandemic in subjects like reading and, particularly, in math, which Powers suggest is more challenging to learn virtually.

Results from the State of Texas Assessments of Academic Readiness exams bear that out because test results show that the steepest learning loss among subjects this past year was math.

From 8:20 a.m. to 1:20 p.m., students receive lessons in math and reading in a traditional setting with teachers assessing early on where they are academically and starting from there.

The playfulness of the themes helps because teachers are creative about how they incorporate those elements in the daily lessons.

But Powers said their participation in Summer Learning goes far beyond basic academics.

“All of our kids need so many things right now,” Powers said. “They have really suffered a lot, academically, socially, emotionally, so we are providing an environment for them to help close those academic gaps, yes, but also to fill that need for social and emotional time they have missed. Some of our kids haven’t been celebrated. They faced depression and parents who have lost jobs or family members. So just being around others and being celebrated in a positive environment is really filling a need.”

“They’re excited but have kind of forgotten how to interact and be around others and be in the same classroom with their teacher,” Powers said. “After they get over that hump, they are fine and happy. That credit all goes to the creativity of the teachers who decided to do this even though they were really tired from the previous school year.”

“We wanted to give them the traditional things they were used to, like the notebooks and getting hands-on attention, which Zoom can’t do,” Daniels said. “For instance, we made play dough the other day in STEM lab. We did the camp fire, the tents, gave them treats. They just keep saying over and over how much they missed being here.”

That goes for the teachers, too.

Daniels, who teaches first grade at Larson Elementary, hadn’t planned to teach over the summer.

But Powers convinced her to return just for the summer. Much like her students, the experience has renewed her.

“Just getting back to teaching in front of students, it’s been invigorating,” Daniels said. “This has just put a fire back in me to teach again.”