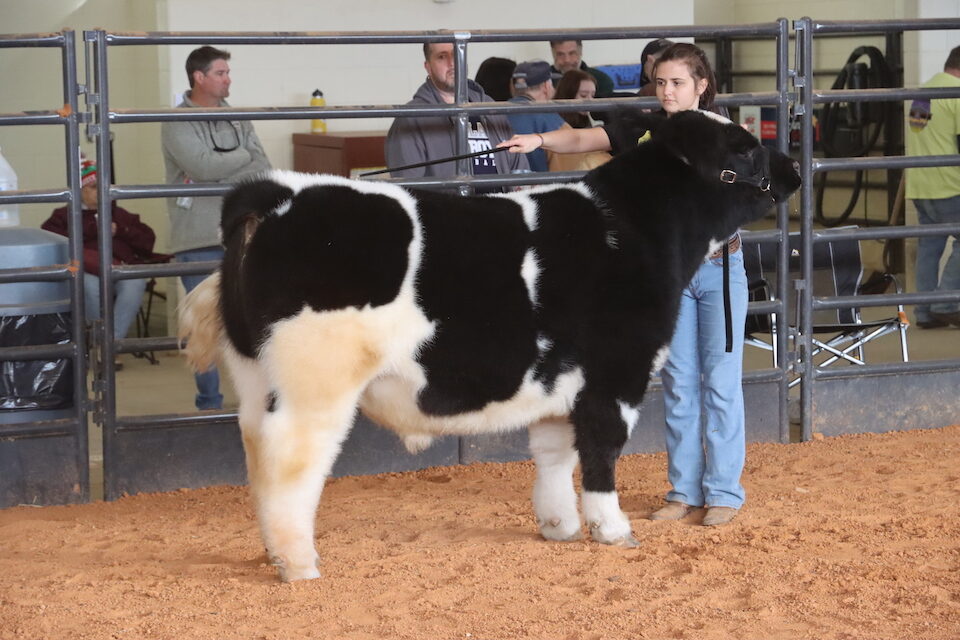 Practice makes perfect. Or at least way better, especially when it comes to major competitions. That’s true for Jordan Gorham, a senior at Arlington High School, whose thing is animals in general, steers in particular.

The seventh annual Arlington FFA Winter Classic Invitational Buckle Show is a big deal, but it looms early in the animal showmanship season, and right now everyone is still trying to get their ducks in a row, so to speak. 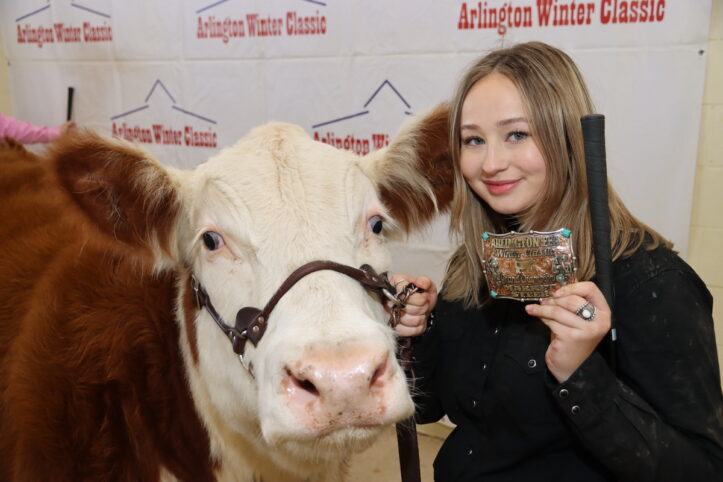 Jordan is off to a pretty good start, based on her Grand Champion status during the cattle showmanship competition at the Arlington ISD Agricultural Science Center.

“That was my first time ever winning grand,” Jordan said. “It was pretty exciting. When I heard him say that, my heart jumped.”

“The ultimate goal is to make a sale at a major stock show in Fort Worth, Houston, Austin, or at county shows,” said agricultural teacher and FFA Advisor Kyle Durr, who invited FFA chapters from Mansfield, Crowley, Lake Worth and Arlington Heights of Fort Worth for the competition. “Before then, like athletics, we do practice shows and get judges’ feedback. This is what you need to do with your animal, this is how much time you need to spend, XYZ. So, for us, we host this one right before the winter break for that. So our students are getting a little bit more competition than just the same kids they see every day.”

Students showed cattle, sheep, goats, fancy poultry and breeding rabbits. Winners received buckles, ribbons, cups and lots of judge feedback on not just the animal but how the student showed the animal.

Instant, public feedback can be both exhilarating and heartbreaking as the judge, a microphone in hand, assesses the animals, right then and there, for all to hear. No secret ballots. 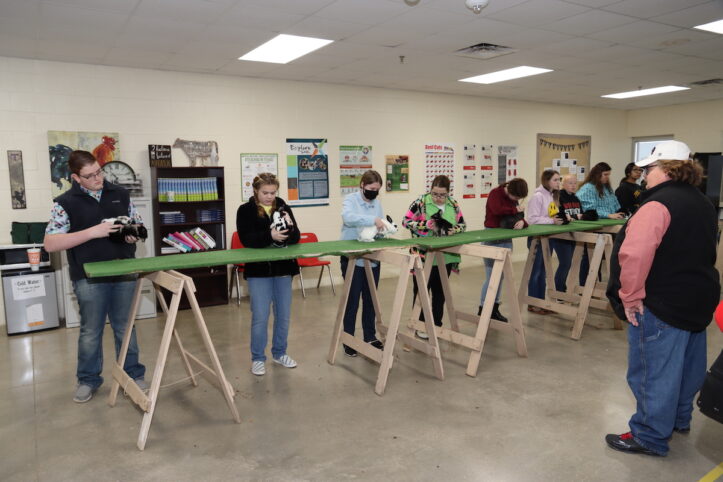 “It’s a kind of a checkpoint done in the last few weeks of the semester,” Durr said. “That way, when they get back, the Fort Worth Stock Show is the second week of January. This gets their animals ready to compete there.”

Jordan was told her steer had good muscle definition and a strong loin. The only drawback was narrow hips.

“Other than that,” Jordan said, “(the judge) said he was well composed and put together. Ready for market.”

Arlington High junior Sammi Schrader’s goat earned the top prize in the lightweight division (two others got reserved, which is like first runner up), quite the accomplishment seeing that her time is so limited.

Sammi is also a varsity cheerleader.

“It’s been really hard especially with the number of goats I have, and we got a trailer just so I could go to more shows and win more,” Sammi said. “So it’s really been a struggle, but I feel like if you have a passion for something, you can find the time for it.”

Like many of the other competitors, Sammi is an animal lover from way back, falling for goats early on and begging her mom to get her one. 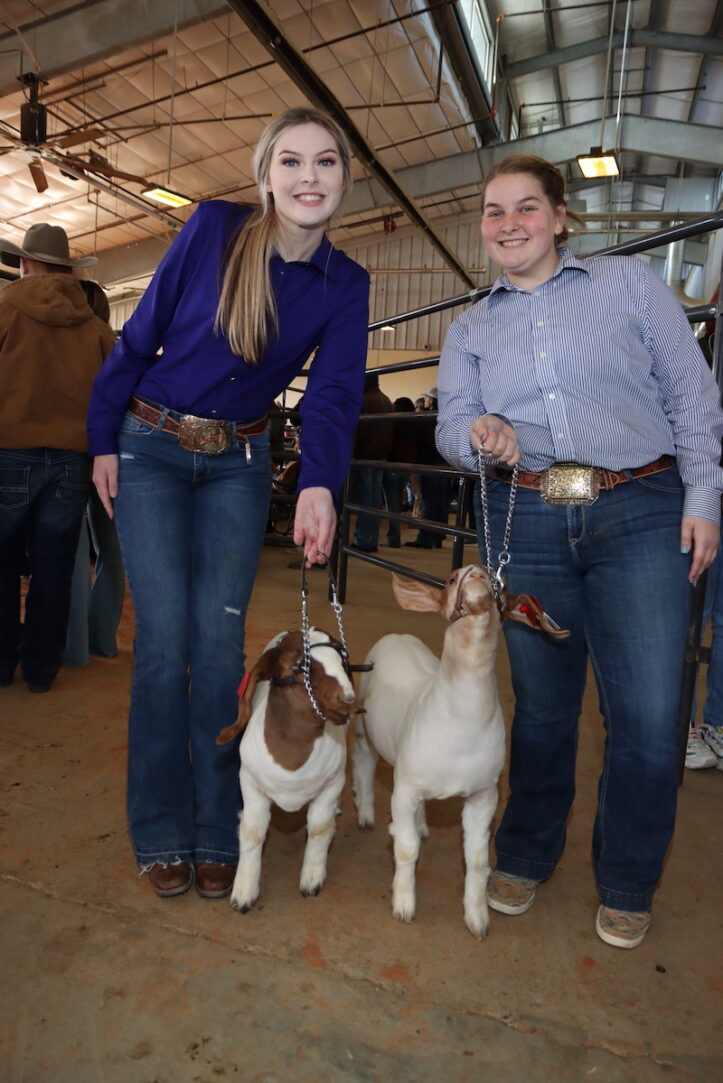 “I thought they were so cute and cuddly,” Sammi said. “They have always been my favorite. And I started winning showmanship at the start. Now I just feel like I have a talent for this.”

As for winning at the event, “I was really proud of my goats. She has come a long way because she was once tiny and having trouble eating.”

She observed her goat a lot and changed her diet after watching what she ate and what she knocked to the side in displeasure.

It made her interested in nutrition as a career, but she also likes psychology. So, she started researching if she could combine her love of animals and psychology.

“I looked into animal psychology,” she said, “but apparently, it wasn’t really a thing.”

Students now make adjustments to get their animals in better shape for the larger competitions coming up shortly. A few years ago, the rabbit of Martin junior Myra Thomas went through “a rough patch” where he was skinny.

“I did a lot of research, a lot of talking to other breeders,” Myra said. “The running breeds need high protein because they exercise. The Polish don’t need as much. I found a food that was a little of both and added things to them like black oil, sunflower seeds for their coat, some fruits for health, oats, mana for the protein for the tans. I just put a lot of time into it because it’s something I really love doing.”

Her rabbit was crowned Grand Champion. “The judge said he had a nice coat, nice build and liked the shape of his head and his posture.”

Arlington High’s Jordan, whose 13,000-pound steer won the overall award, said she’ll continue to feed her steer a mixture of sweet feed and other kinds of supplements that target certain things in the body structure. As for those narrow hips, “that’s how he’s built,” Jordan said.

“As an owner, there are some things you can change,” Durr said. “If the judge is seeing I need more fat or more condition, I can change that animal’s diet. If that animal doesn’t walk correctly, well, there might not be a lot I can do with that animal. It just might have bad structure or bad bones. So that student can say, cool, I will go back and adjust and hopefully do better at another show.”