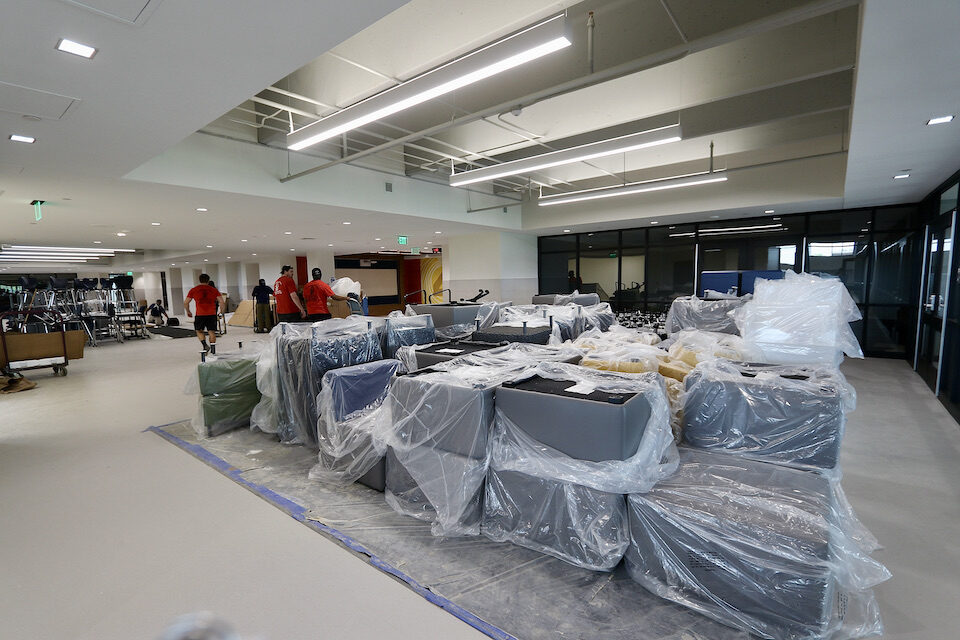 Sure, Gunn Junior High and Fine Arts and Dual Language Academy art teacher Zena Young is excited about the summer. But right now, she’s more focused on next year.

“I’m just as excited about getting my room set up,” Young said.

Instead of packing up her art room to head home for the summer, Young packed up her room and then moved all her stuff to a new room for next year.

Her new room is one of three art rooms located in Gunn’s original building, now completely renovated. Most of the original building was closed all school year while it was gutted and rebuilt. But now, renovations are wrapping up, and teachers spent this week moving in and preparing for next year.

Teachers like Young can’t help but be excited with the new facilities. She spent the past year in a temporary location – a science lab that lacked the storage that art requires.

“Here (in the new room), we have an abundance of storage conducive to art,” she said.

She’s also excited about the plugs that hang from the ceiling. They’ll be great for powering for small tools like glue guns and dremels from anywhere in the room.

But perhaps most exciting is access from the art room to the outdoors.

“It’s just amazing,” Young said about the opportunity to go outside and draw or paint nature. “It does wonders for the kids.”

The end and beginning

The comprehensive construction has done wonders for Gunn, which originally opened in 1972. And the project is almost finished. After years of construction, the project at Gunn is actually wrapping up several months ahead of schedule. That means when students come back in August for the new school year, construction will be complete and the new Gun will be ready. It will make a new beginning for the 51-year-old school.

The years-long project, funded by the 2019 Bond, included three additions. The largest addition – all classrooms – is on the south end of the building and opened in time for the 2021-22 school year. The second addition enclosed what used to be open space between the original building and the gym/cafeteria building. It houses an all-new cafeteria (the old cafeteria was demolished), a kitchen expansion and a media center. The third addition, on the north end of the building houses new locker rooms.

Once the first and largest addition opened in August, the original building was closed off for renovations and was under construction throughout the 2021-22 school year.

Gunn will have a new turf athletic field and new parking lots. Plus, the entrance was moved from the east side to the west side of the building.

The purposeful design of Young’s art room is indicative of the entire building. The campus has been completely transformed to accommodate the district’s new fine arts and dual language academy while still hosting seventh and eighth graders zoned for Gunn. (Learn more about Gunn.)

“We built this building around what we want to accomplish as a school,” Gunn principal Matt Varnell said. “The instructional goals were key to determining what kinds of spaces the building needed.” 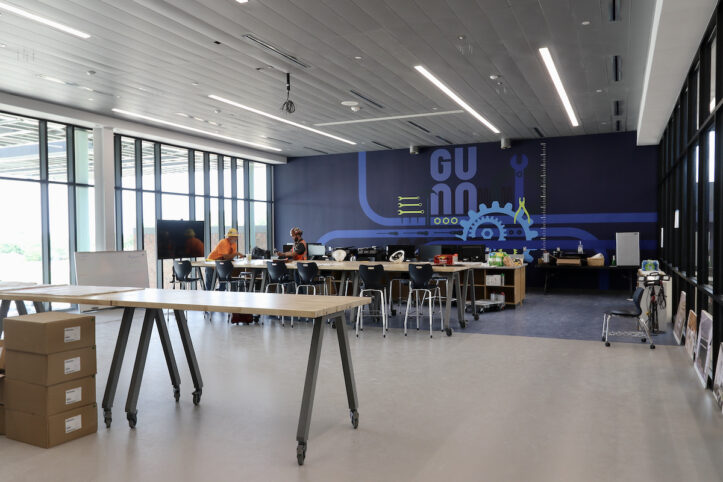 Gunn now has state-of-the-art fine arts spaces – like the dance studio and black box theater – along with collaboration areas and a fab lab. All of the spaces are designed to promote learning and accentuate the school’s educational model.

“Finding connections across disciplines makes learning stronger,” Varnell said. “When students can connect their academics and the arts, students’ understanding is deeper, and the learning lasts longer. That’s the idea behind arts integration. Finding authentic connections between the arts and non-arts create neural networks. We’re trying to make learning as relevant, meaningful and as individualized as we can.”