Carol Hughes runs marathons, which is somewhat astonishing to those who knew her way back when, herself included.

She enjoyed track and field – at least the field part, competing in high school as a long jumper. Hitting the runway and leaping into sand was the extent of her putting one foot in front of the other for any length of time.

“I never really ran – didn’t much like it,” said Hughes, the Berry Elementary School librarian. “My sister was a runner. So I tried a 5K once. But I didn’t know how to run it and ran too fast.”

The rookie mistake made her physically ill.

After that, “I would get really nervous at the thought of running,” Hughes said. “So I was like, no, I hate running. Won’t do that anymore.”

How things have changed.

If at first, you fail, try again

In November, Hughes joined 30,000 other runners in the Philadelphia Marathon, covering the 26.2-mile course that passes along charmingly historic streets and zips along iconic landmarks like Independence Hall and the Liberty Bell Center. All the while thousands cheer along the route. 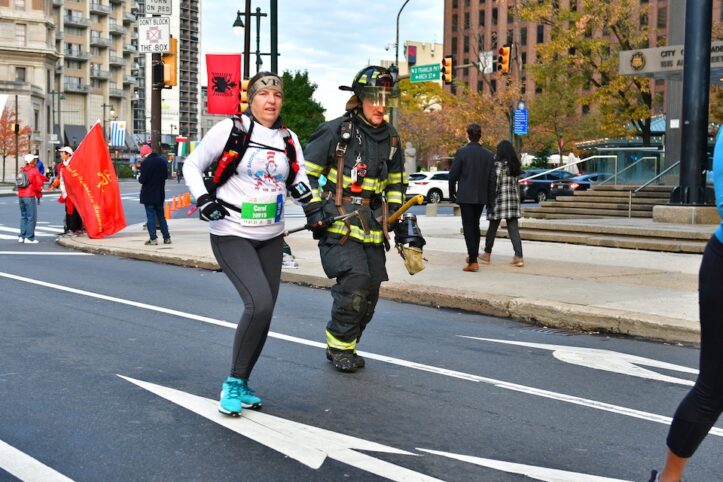 It was her first marathon in Philadelphia, but her 50th overall.

“I don’t usually tell people about this because they are usually like, ‘uh, yeah, sure you did,’ or ‘yeah, it would take you a month,’ or ‘did you sleep and camp out?’” she said, laughing.

No sweat on the reactions, said Hughes, since running for hours seems undoable for most, and to return 49 times after the first one seems a bit wacky.

How she got to this point is just as wacky for someone who deplored running.

“Around age 52, about 10 years ago, I came back from Kansas and I was getting to that age where you start to put on weight, and told myself that I needed to do something about it,” Hughes said.

You get the idea.

Hughes returns to marathons because she loves the feeling of accomplishment, like climbing Mount Everest or leaping out of an airplane at 10,000 feet.

And it keeps going. She once competed in a 100-mile race that took her 32 hours to complete.

That’s certainly not something she offers up in casual conversations.

“When people hear I did that, they think I’m crazy,” she said. “It was a surreal experience. I’m glad I’ve done it.”

For Hughes, running “is this feeling that I could do more than I thought I could do. Pushing myself to do more, and when people tell me I couldn’t run that far, I prove to myself that I can.”

It’s a well-worn philosophy that boils over to her students at Berry, and has been since she arrived at the school in 2016.

“I use my own running experiences to try and get them to stretch themselves,” Hughes said. “Like reading chapter books. I tell them the more you practice reading or doing anything, really, the more you will see as far as results go. It’s the same philosophy.”

Put in the work, she tells her students, and simply step back and watch the results.

Hughes shares similar stories about her move to library services. Armed with an elementary education undergraduate degree from Oklahoma State University, she taught a variety of subjects in a variety of elementary grades. She decided on library services when her school district offered to pay tuition for teachers wanting to become librarians.

At the time, her school didn’t house a stand-alone library – students met in the cafeteria. She ended up taking the district’s offer and earned a master’s in library and information studies at the University of Oklahoma (Hughes is a twice-certified National Board-Certified teacher) and became her school’s librarian.

“This is all related, whether it’s running or achieving to get a degree or advanced degree,” Hughes said.

It’s about perseverance, she said. About “staying the course.”

Like running a marathon that will take up to three or four hours for the average runner (not the elites who cross the finish line at two hours plus), Hughes is a “rear” runner, which means she starts slow and catches a bunch of folks along the way, many of whom she chats with while running.

It’s the teacher in her, of course. Many runners she sees on the course are doing the race for the first time. She gives them real-time tips (slow down a bit, refuel at the hydration stations, enjoy the scenery).

“It’s exactly like a car with fuel,” Hughes said of hitting the hydration stations. “When you run out of fuel, you stop. I tell people all the time you have to watch your nutrition. Run together. Try and make it fun so you’re not thinking too much about being tired.”

Do what makes you happy

Hughes lives in North Richland Hills and uses the city’s trails for training. Philadelphia was her first marathon in three years; many races just opened up this year after COVID-related cancellations. She wasn’t sure how it would go after such a long hiatus, but one thing is for sure: the running bug is back.

“I’m already looking at running in South Carolina in the spring,” she said, plus other races in summer and fall.

“I tell people running for the first time that, for me, I had to learn how to run,” Hughes said. “Some people who run fast don’t feel an accomplishment by going slower. I tell people who want to do longer distances that you have to slow down. Just slow down. Enjoy the run. I relay that same information to my students.”

Hughes never set out to break records. She tells her students not to set out for academic perfection. The idea is to learn to love learning.