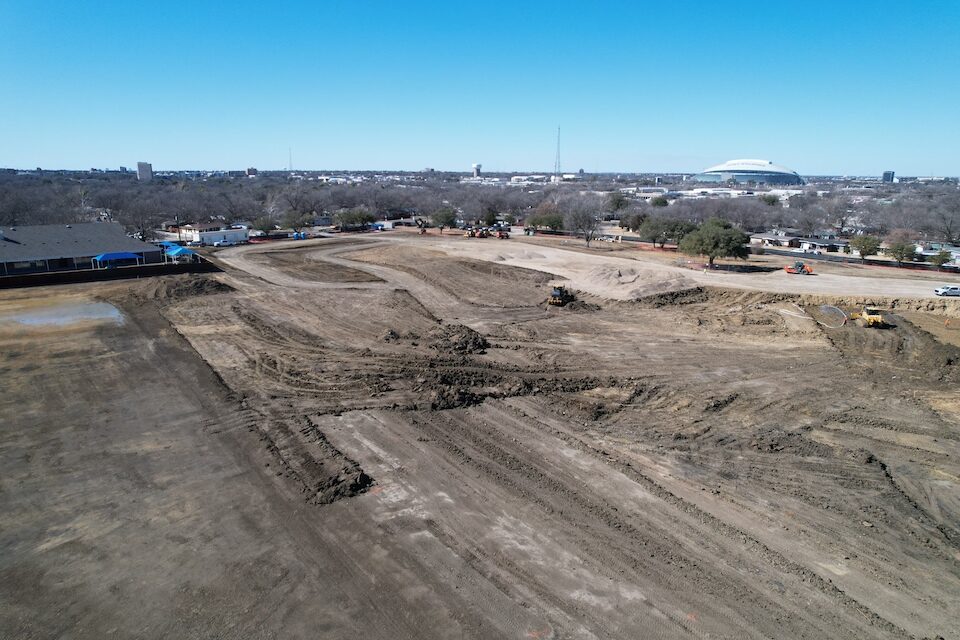 Construction is officially underway for the new Berry and Thornton elementary schools. Groundbreaking ceremonies were held back in December, but now heavy machinery has arrived, dirt is moving and the two sites for the future elementary schools look like real construction zones.

The original Berry and Thornton were built in east Arlington in the 1950s and needed to be replaced. Thanks to the community through the 2019 Bond program, that’s exactly what is happening. The old buildings were demolished last year to make way for new schools carefully designed to inspire Arlington students and give them every opportunity to learn and succeed in the 21st century.

At Berry, the rough grading is underway and lots of dirt is getting moved. They will start installing utilities next week.

See photos of the Berry construction.

It’s a similar scene at the Thornton site. The rough grading is about 75% done, and they have begun installing the sanitary utility line. Next week, they plan to start the auger cast piles, which are drilled into the ground for the foundation.

“With construction underway and having a front row seat as I drive past the construction site every day, I get a daily dose of excitement for our Thornton students, families, staff and community,” said Thornton principal Alicia Rodriguez. “I think about how the new school building will revitalize and beautify our community, and I look forward to that transformation.  Most importantly, I think about the transformation that will simultaneously take place at our temporary Thornton as the excitement builds and we plan for the opening of the new school while staying focused on what’s most important, meeting the needs of our students right now.  Definitely, these are exciting times!”

Both Berry and Thornton are scheduled to open for the 2023-2024 school year.

Not too far away, Arlington ISD is building another replacement elementary through the 2019 Bond. The new Webb Elementary, under construction right next to the old and current Webb will open next year. That means some of the steel has been erected and some of the framing is underway. MEP ductwork is now starting to be installed and the first windows should go in this month as well.

See photos of the Webb construction.