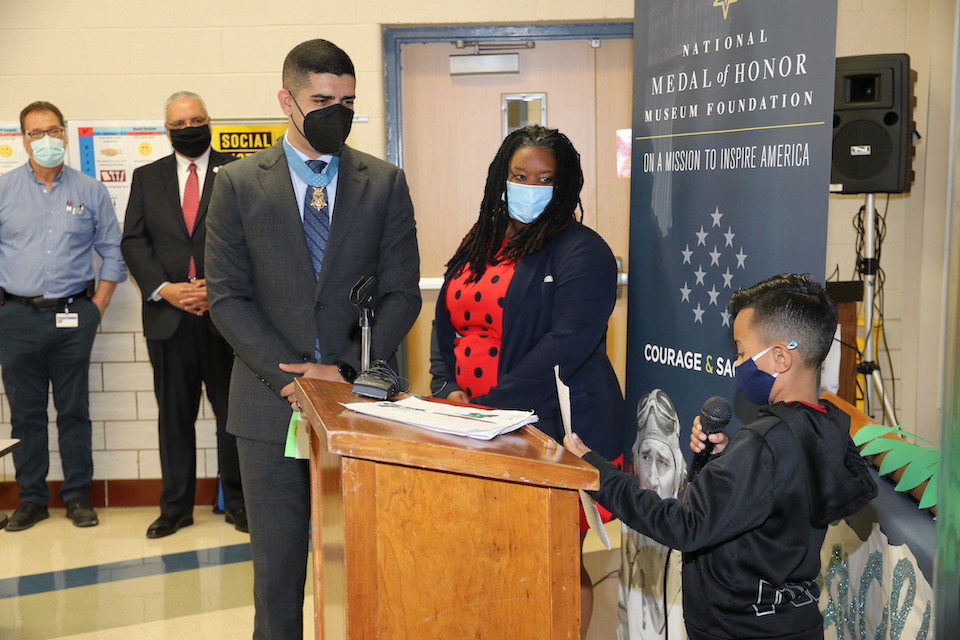 Groberg was awarded the Medal of Honor by former President Barack Obama in 2015 for tackling a suicide bomber in Afghanistan. He is a retired United States Army officer, employee of the Department of Defense, and author of “8 Seconds of Courage: A Soldier’s Story from Immigrant to the Medal of Honor.”

“I took school as an opportunity to become something bigger than I ever dreamed of,” said Groberg. He credits the education system as having a major impact on his character development and work ethic. Groberg made it a point to show his gratitude for educators by stating, “They call us heroes, but the real ones are teachers.”

The school hosted Groberg in partnership with General Motors and the Medal of Honor Museum as a part of their Mail Call program, which allows students to send letters of appreciation to military personnel. In preparation for Groberg’s visit, the students began researching the significance of the Medal of Honor and presented him with letters. The guest of honor humbly expressed, “These little moments let us know someone is thinking about us while we’re away at war, and they save lives…[students] writing these letters means the world to me.” He also revealed the letters he received in Afghanistan gave him the chance to feel like he was at home despite being thousands of miles away and lacking basic essentials such as socks and gloves.

Florent is a native of France and did not begin speaking English until age 12.  He later became a citizen of the U.S. in 2001 and entered the Army in 2008 after graduating from the University of Maryland. “I wanted to be a part of the difference, so I decided to join the Army,” Groberg stated.

“This experience has been a huge honor and pleasure for staff and students at Roark,” Roark interim principal Ebony Key said. “It was amazing to meet a real hero and have him encourage and motivate the students to continue on a path to success.”

Representatives from General Motors were also present to honor Groberg and briefly spoke on their partnership with the Medal of Honor Museum, which is slated to open its Arlington location in 2024.

Groberg has dedicated his life to courage, sacrifice and integrity.  In his final words to the students he encouraged, “Dream big, and always do for others before you do for yourself.”

His life is a great reminder not all superheroes wear capes.