Old school building to be torn down and rebuilt 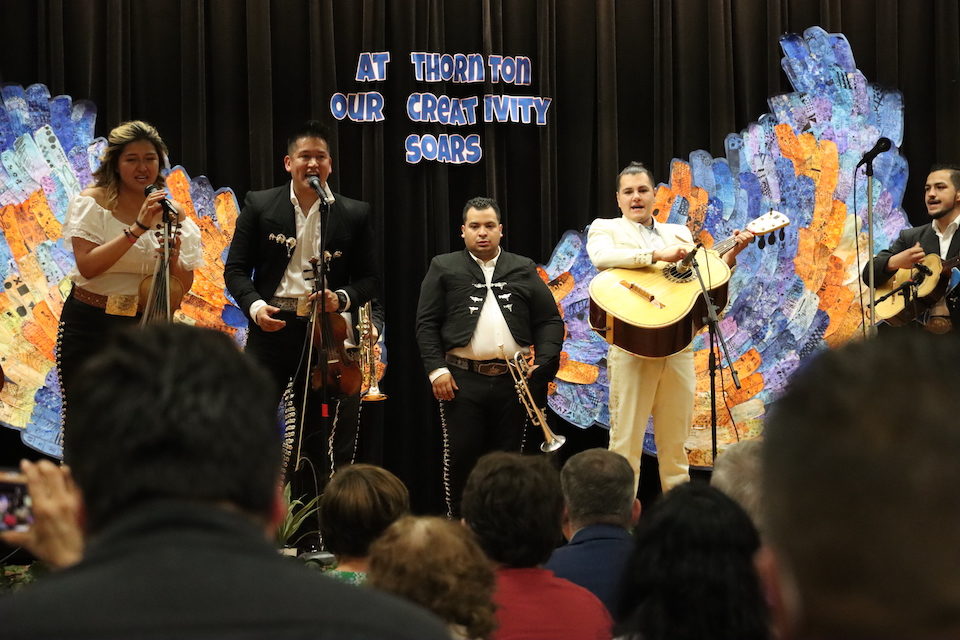 It’s not often – if ever – that you get to see Arlington ISD superintendent Dr. Marcelo Cavazos coaxed to the stage during a mariachi concert. But that’s exactly where he was recently when he joined teachers, staff, students and parents celebrating the legacy and future of Thornton Elementary.

Thornton is about to be torn down and replaced with a new, bigger building funded by the 2019 Bond. But before wrecking balls arrive, the school took an evening to “honor the past and celebrate the future.”

“We are excited for what the future brings for our community with the construction of a brand new school,” Thornton principal Alicia Rodriguez told the audience.

The excitement – and nostalgia – were palpable. A full mariachi concert – complete with a dancing train of teachers and staff (Cavazos included) circling the room and winding up on stage – amped the excitement. And everyone there brought the nostalgia with their years of memories. Hugs were abundant as friends, classmates and co-workers united for one last walk through their building.

This Thornton building, while special, has seen better days. Built in 1956, its maintenance needs and costs are significant, and its design is far from ideal for 21st-century learning.

“Enough with the additions, enough with the patching up,” said Cavazos to approving applause. “There comes a time when we have to start over.”

Thornton will start over with a new building, but it will preserve its decades-old spirit, multiculturalism and love.

“Thornton has a love that has persevered through its history, and I have no doubt that love will continue in the new Thornton,” Cavazos said.

The project to demolish and rebuild Thornton is part of an east Arlington master plan to modernize schools and give students an optimal 21st-century education. The plan will rezone the entire area, replace Thornton and Berry Elementary schools with new, bigger buildings funded by the 2019 Bond and close Roark and Knox Elementary. (Learn more.) While the new Thornton is under construction, the school will relocate to the building previously occupied by Knox.