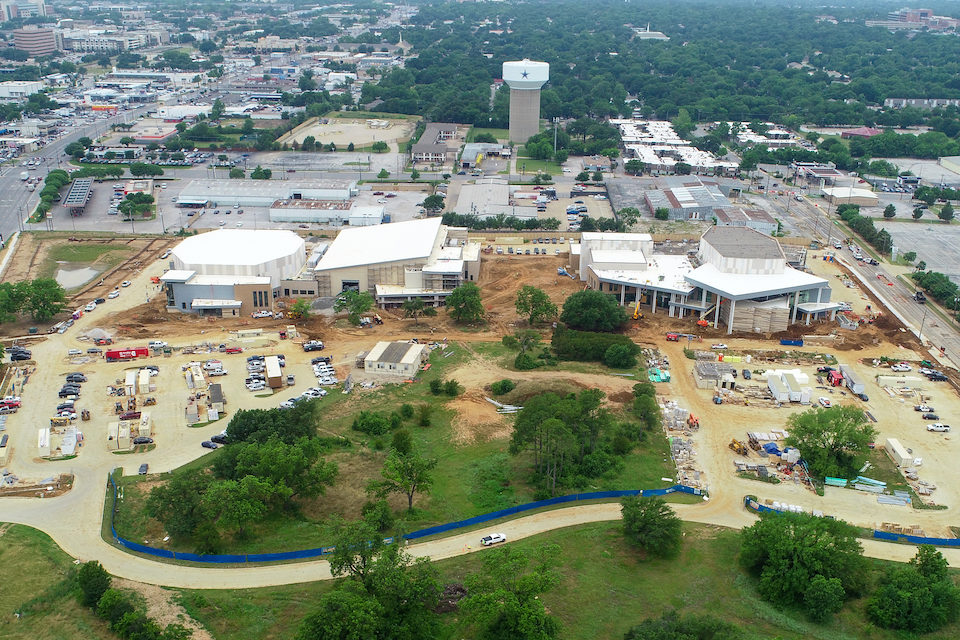 A Closer Look Inside The New Arts And Athletics Facility

Windows are going in, sheetrock is going up and the pool’s frame is in place. Check out the construction progress of the future Arlington ISD Arts and Athletics Complex – which includes the Center for Visual and Performing Arts and the Athletics Center – in this virtual tour video.

The Center for Visual and Performing Arts is nearly dried-in. The roof is complete, and the exterior window systems are almost finished. The building has permanent power, and mechanical systems have been started and are circulating air in the theater and concert hall so that installing finishes can begin. The concert hall still has scaffolding up so baffles and lights in the ceilings can be installed. When that is complete, the scaffolding will be removed and work on the high wall finishes and balconies will begin. In the theater, workers are completing the walls and balcony and will then start installing the finishes. In the administration and teaching areas, crews are finishing the above ceiling work and starting to frame the ceilings.

The Athletic Center is also nearly dried-in. The roof is complete and the exterior window systems are being installed. The ceiling and walls of the arena are being painted now. In the natatorium, the area around the pool frames have been filled in, and work is beginning to pour the pool deck. In the lobby and locker rooms, crews are finishing the above ceiling work and framing the ceilings.

Check out photos of the construction progress.

Construction of the Arts and Athletics Complex is the final project of the 2014 Bond.

The Center for Visual and Performing Arts will serve the entire district, grades Pre-K-through-12, with world-class performance and demonstration venues. It will include a 1,250-seat concert hall, 425-seat theater, classroom space, art and dance studios, instrument repair center, and art gallery.