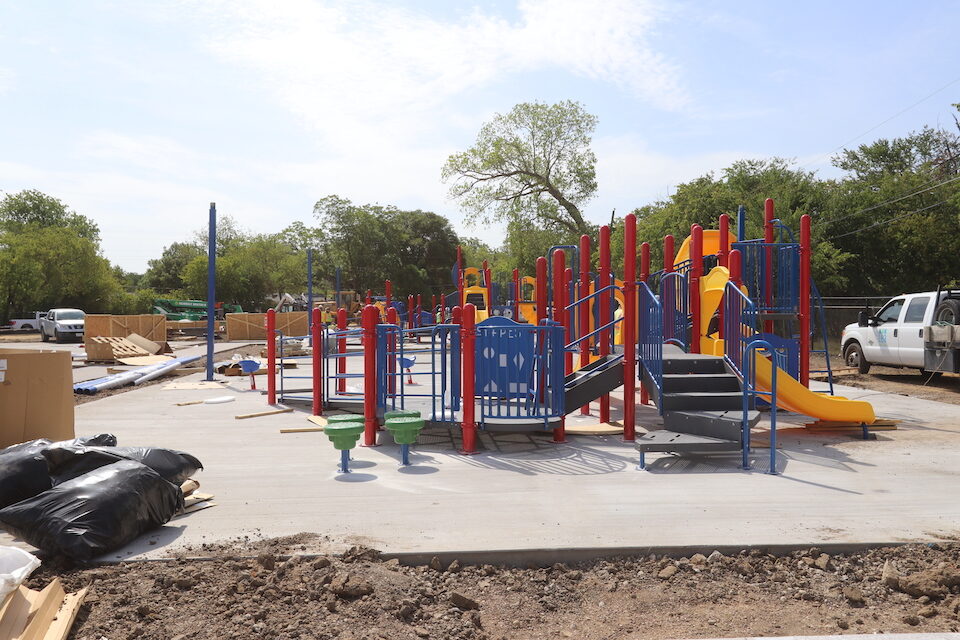 They started pouring concrete at 4 a.m. last Wednesday morning at Crow Leadership Academy. That’s what you have to do when it’s so hot during the day.

But despite the early wakeup, everyone is excited to start building playgrounds again. 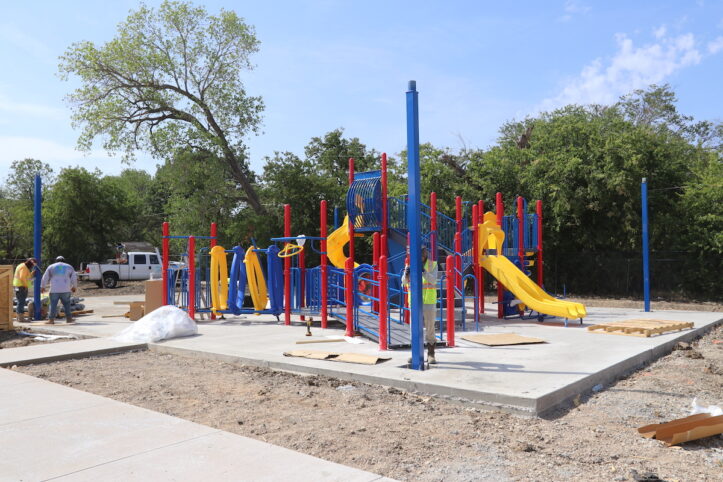 “We’re really glad to get moving forward at Crow after waiting so long for the playground equipment to come in. It will be very satisfying to have the students come back from summer to a brand new playground area,” said Shane Strawderman, Arlington ISD’s project manager over the new playgrounds.

See photos of the installation at Crow.

The new playgrounds are part of the 2019 Bond program. Every elementary school is getting two – one for pre-K through first grade, and the other for second through sixth grade. The playgrounds include shade structures, accessible play equipment and rubber surfacing. While the equipment is standard from campus to campus, each school got to make their own color selections.

But after completing the playgrounds at 17 elementary schools in 2021 – the first of three phases that all 53 district elementary schools were divided into – progress ground to a halt. Global supply chain issues have caused major delays in getting playground equipment. The lead times (how long it takes to get something after it’s been ordered) soared and became unpredictable.

Despite the delays caused by global supply chain problems, Arlington ISD’s commitment to building the new playgrounds hasn’t changed. The construction team had to pause and regroup, but now they’re moving forward again.

Though there are still long lead times for playground equipment, phase two construction is underway. Crow is among the first three schools in phase two to start construction. Concrete slabs for the new playgrounds have also been poured at Webb Elementary and Wimbish World Language Academy. Work will start at 14 more elementary schools throughout the fall, and all the new phase two playgrounds should be completed by early 2023.

“The new playgrounds at Bebensee have been a breath of fresh air for our students, staff and the families in our community,” Bebensee principal Charlotte Carter said. “We are all so excited about the variety of state-of-the-art ‘learning thru play’ themes that challenge our students. There’s a music center with miniature drums and other instruments, several climbing walls and a variety of large and small motor skills stations. Plus, it’s built with all of our students in mind. We love it!”

See photos of Bebensee’s playgrounds and read about the excitement when the new playgrounds opened at Pearcy STEM Academy.