Gunn is 50 and new again 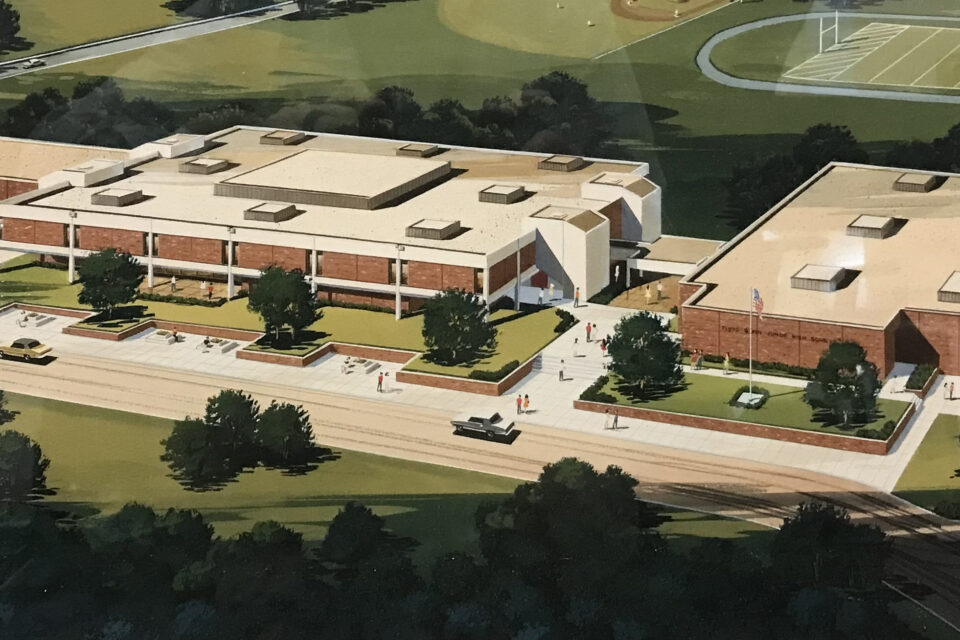 It was the fall of 1972. The Texas Rangers were plodding their way through their inaugural season, and Arlington’s population, around 90,000, was soaring. It had doubled in the 1960s and would nearly double again in the 70s.

The city of Arlington was booming, and it needed more schools.

Enter Gunn Junior High. The open-concept, two-story building opened its doors on Fielder Road for seventh, eighth and ninth graders that year. Named for Floyd Gunn, an 18-year veteran of the Arlington ISD Board of Trustees, Gunn quickly established itself as a fixture in the community and a powerhouse for academics, the arts and athletics.

Hundreds of Gunn students, parents and supporters – past and present – gathered on Saturday at the school to celebrate Gunn’s 50-year legacy.

“It’s an amazing legacy that Floyd Gunn has left, and all the people who have come through the school – students, staff, principals – everyone has collectively built the culture of Gunn and what it is today,” said former Gunn student and current Arlington ISD trustee Sarah McMurrough.”

McMurrough got more from her time at Gunn in the mid-1990s than just a great education.

“This is actually where I met my husband, Chris,” she said. “If it weren’t for Gunn Junior High, I would not be Sarah McMurrough.”

The current Gators are excited about the school’s legacy and future, too. The campus was open for tours, and if you ventured into the theater room – a state-of-the-art black box – you met seventh grader Noah Brown and eighth grader Samyah Garcia. They gave tours of the room and couldn’t hide their enthusiasm for theater and their school.

“It just feels amazing being a part of this monumental school,” Brown said.

“And the fact that it’s on its feet and still thriving after 50 years just means so much,” Garcia said. “You get so many opportunities … this is where I fell in love with theater.”

There are so many opportunities because of the strong community within and surrounding the school.

“This is what’s right about public education,” said Arlington ISD superintendent Dr. Marcelo Cavazos. “An investment by a community – a community that said there is a standard of success that we can pursue and realize … It’s a continuation of excellence that builds and builds and builds to what you see today and what we’ll see for the next 50 years.”

See photos from the event.

The address hasn’t changed, but everything about the building has. After nearly three years of construction and renovations, Gunn kicked off its 50th year in a facility that looks very little like it did in 1972. Even the name is a little different – Gunn Junior High and Fine Arts and Dual Language Academy – since the campus, still the neighborhood junior high, is also now home to the district’s first junior high fine arts and dual language academy. 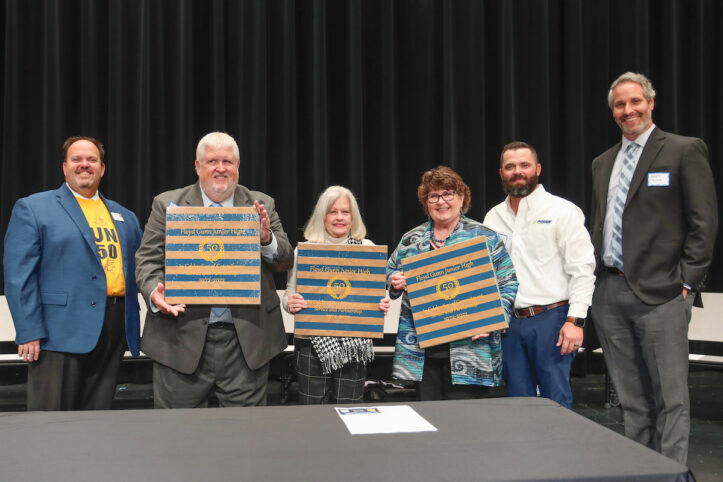 The addition of the academy, which opened last year with the first sixth-grade cohort to complete the elementary fine arts and dual language programs at Jones and Corey academies, was the impetus for the massive overhaul of the school. Funded by the 2019 Bond, Gunn’s transformation included three additions. The largest addition – all classrooms – is on the south end of the building and opened in time for the 2021-22 school year. The second addition enclosed what used to be open space between the original building and the gym/cafeteria building. It houses an all-new cafeteria (the old cafeteria was demolished), a kitchen expansion and a media center/library. The third addition, on the north end of the building houses new locker rooms.

Once the first and largest addition opened in August of 2021, the original building was closed off for renovations. Throughout the 2021-22 school year, the interior was demolished and rebuilt. Gunn also has a new turf athletic field and new parking lots. Plus, the entrance was moved from the east side to the west side of the building.

“We built this building around what we want to accomplish as a school,” Gunn principal Dr. Matt Varnell said. “The instructional goals were key to determining what kinds of spaces the building needed.”

Gunn now has state-of-the-art fine arts spaces – like the dance studio, piano lab and black box theater – along with collaboration areas and a design/manufacturing lab. All the spaces are designed to promote learning for all students – traditional and academy – and to accentuate the school’s educational model. 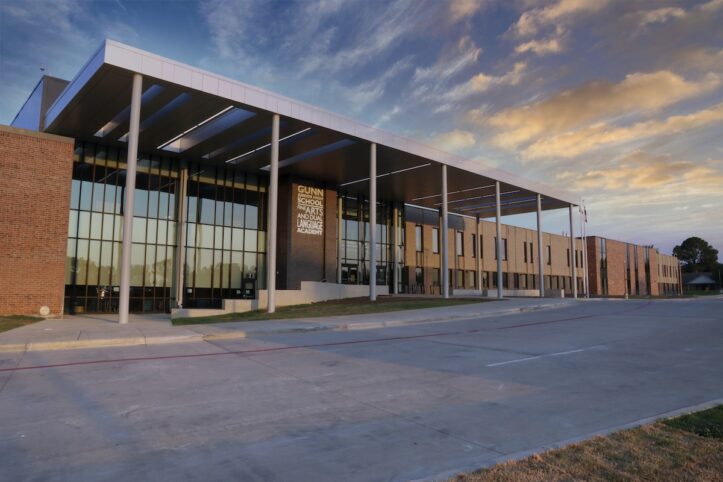 It’s a model intended to help every student thrive by allowing multiple pathways to success. It’s about meeting each student where they are, inspiring them to learn and build on their personal strengths, and empowering them to invest in their own learning.

“The question we ask is, ‘How are they smart?’” Varnell said. “Finding the way that a kid is smart is the key to their success.”

That means providing a diversity of learning opportunities – with facilities to match – so every student will be inspired to learn and grow.

“Daddy, he would be busting proud,” said Susan Gunn of her father, Floyd Gunn, the school’s namesake. “He would love this.”

Then Susan turned toward Collin Carlisle, the Pogue Construction superintendent who managed the construction at Gunn.

Even with all the changes, some things remain the same. That Gator spirit – now 50 years old – is still alive and well.

“The culture of Gunn has always been a family atmosphere,” Varnell said. 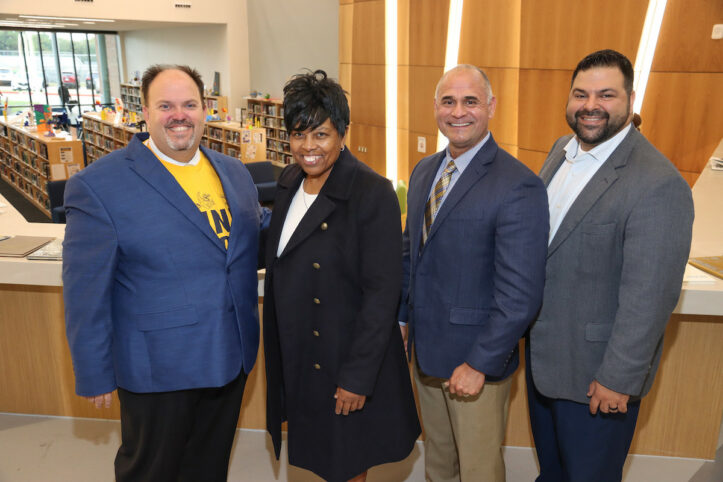 It’s a culture and tradition that Varnell intends to celebrate and maintain.

“The tradition for me is the notion that everybody feels like they belong,” he said.

It’s the school spirit behind what it means to be a Gator, from simple silly things like doing the Gator chomp to the high expectations for students and staff.

In 1985, Chris Cordero, the editor of Gunn’s yearbook Gator Tracks, summed up the year.

“As a school, we have excelled both scholastically and athletically. These successes resulted from the joint effort of the student body, faculty and staff. Long hours, hard work and commitment were the basis for our accomplishments.”

That could just as easily be written for this year’s annual.

“The past success of Gunn Junior High was built on a shared community of you – every single one of you,” Susan Gunn said. “It’s a bond, a shared, unbreakable bond that will continue now within these new walls with new teachers, new students, new laughter for the next 50 years.”