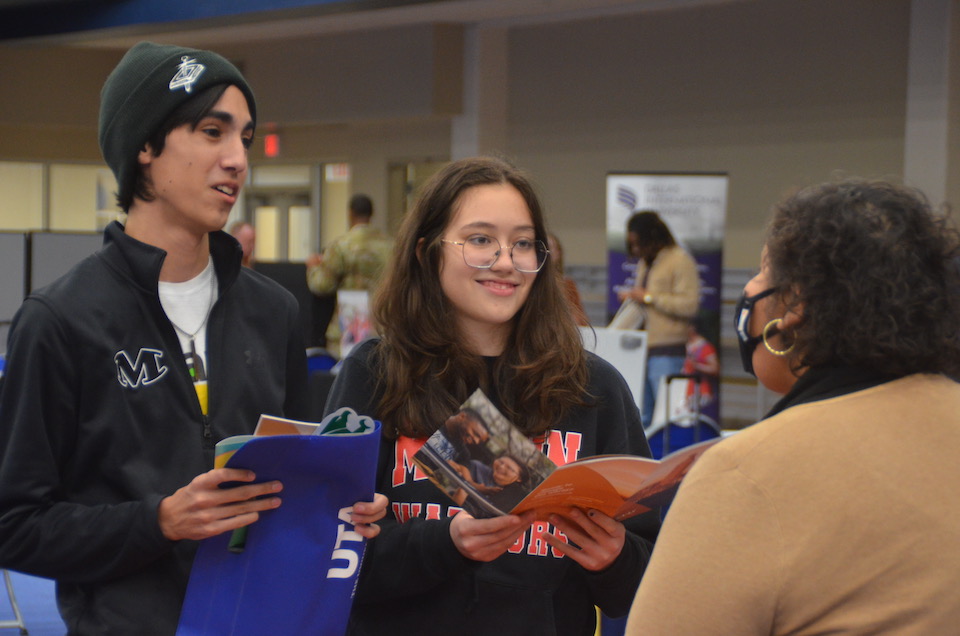 Monsters Inside Me is a long-running documentary series about infectious diseases where you could watch a man develop a strange growth on his wrist or a pregnant woman fall dangerously ill with flu-like symptoms, yet in the end, it’s not the flu at all.

Instead, it’s parasites eating up the body. That medical phenomenon is what fascinated Dewey Saracey, a Martin High School junior, back when she first watched this series with her mother at the age of 10 or 11.

“It was just so interesting to me for some reason, even at that age,” Dewey said.

Not much has changed. Dewey plans to study parasites in college, as a microbiology major, which explains why she recently trekked through the rain to attend the annual Arlington ISD College Night held in the MAC Center on the University of Texas at Arlington campus.

This is the annual event where students have the opportunity to visit with college recruiters to hear firsthand about majors, campus life and what makes their college experience unique. Parents are usually along for the ride and often lead the charge shortly before the college fair begins by sitting in on workshops explaining the ins and outs of the current financial aid environment.

The number of college attendees was smaller than in year’s past because of COVID concerns, but a number of representatives were there, from schools such as Wichita State University in Kansas and the University of Alabama to military installations like the United States Army. There were also specialized colleges such as KD Conservatory College of Film and Dramatic Arts.

Michael Schrader, a senior at Sam Houston High School, is interested in Texas A&M but came away impressed with a school he had never heard of. Dallas International University prepares students for what it labels as cross-cultural service with degrees in fields such as Abrahamic Studies, Linguistics, Scripture Engagement, Translation and World Arts. 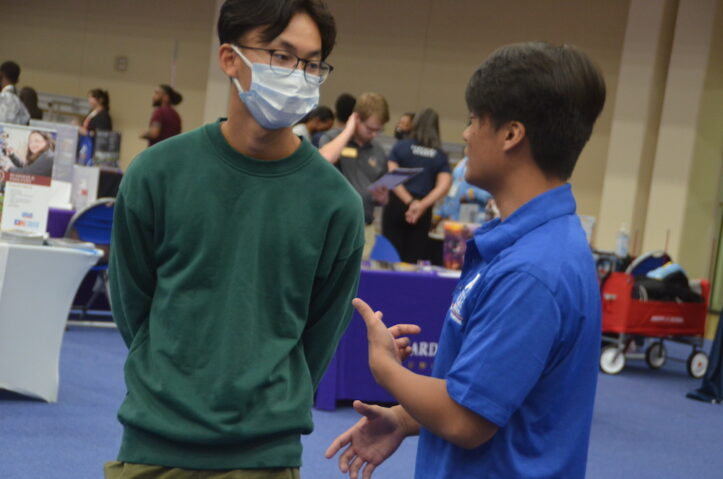 “It just sounds really interesting, kind of different from the other schools,” said Michael, who is undecided about a major. “So, yeah, I’ll look into it.”

When it comes to the whys of attending Arlington ISD College Night, students are all over the map in terms of vision and preparation, said Lamar High School counselor Dorian Jansen. He spent a majority of his time at the fair stuffing bags full of college brochures and trinkets to take back to his students.

“It’s just great to see students in here,” Jansen said. “Last year a lot of students decided to not to go to college because of the lockdowns and restrictions. They said ‘I just want the college experience,’ and that wasn’t it.”

Jansen said many of his students are motivated this year to attend, feeling “the on-campus environment will be freer for them,” he said. “Plus, a lot of universities aren’t requiring SAT and ACT scores so that motivates kids to try for colleges based on their GPA and their extracurriculars. We try to encourage them to do more. You don’t have to be completely well-rounded but it’s good to be committed to something. Something that’s big and motivates yourself that is different from others so that you can stand out.”

Others know exactly what they want. Mark Regalado, a Martin High School senior, is interested in photo journalism. His mother, Tricia Regalado, is a veteran journalism teacher at the school.

“I have applied early because I want to be ahead of the game,” Mark said.

So does Zachary Atlas, whose graduating class is 2023. The Arlington High School student has his sights on UT Arlington where he wants to learn automotive engineering and be a part of the school’s famed car racing team.

“He knows more about what he wants to do than I did at his age,” said his mother, Suzanne Atlas, a counselor at Sam Houston. “I made the big sister come to this her junior year, too. He was a lot less argumentative about it than she was.”

While Zachary and others like Tien Le, a senior at Bowie who is laser-focused on attending UT Arlington’s College of Engineering, want to stay local (“I like the idea of it being close to home,” Tien said) others want to ship out. Way out.

That’s why Dewey, the parasite aficionado, is seriously looking at Penn State, some 1,300 miles away, and Maryville University in St. Louis (about 600 miles). Martin classmate Mark insist that early choice the University of New Mexico “has a good journalism program, and New Mexico is really pretty.”

It’s also nearly 700 miles away from his home.