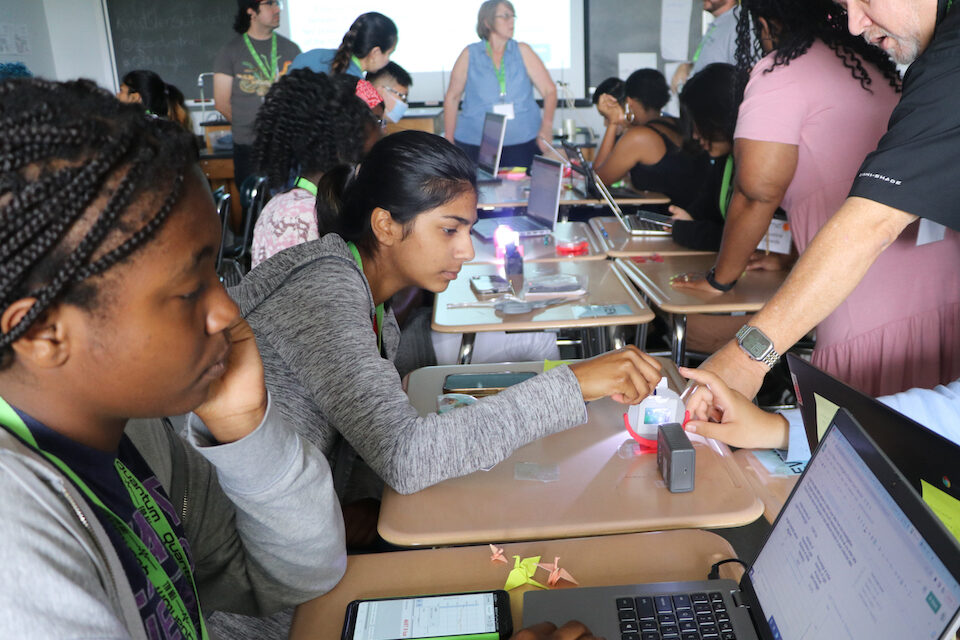 This summer camp was designed to change America.

It’s a tall order. But it might have seemed like a tall order to get high school students to give up their lazy summer days to learn about quantum physics.

And that wasn’t a problem.

It wasn’t your typical summer camp. These students chose to go back to school to learn modern physics concepts and conduct experiments.

“I’m taking physics next year,” said Martin 10th grader Shalom Ehikheumen, “so I thought I should learn something about physics.”

She learned something about physics. And a whole lot more.

She and her campmates dove into engineering design, 3-D planning, coding, internet security and STEM career opportunities. And most importantly, they received an introduction to quantum physics – and to their future.

“We need to make these kids aware that their future is going to be based on quantum,” said Dr. Karen Jo Matsler, director of Quantum For All at UT Arlington. “Everything is getting to the quantum level. That’s where the jobs are. That’s the future.”

The Student STEM Camp is Matsler’s invention, part of her passion and mission to fix a huge nationwide problem in the United States.

Matsler, a former longtime physics teacher at Lamar High School and a professor at UTA, traveled to Canada for a conference about 12 years ago and had a major lightbulb moment.

“All these other countries were teaching quantum. Why are we not doing this?” she said.

Quantum mechanics is increasingly becoming the foundation of technology and innovation, but it’s not taught in American high schools.

“We need this in high school,” Matsler said. “But no one knows how to do this. Most teachers aren’t trained.”

Matsler came home from Canada with a new mission.

She partnered with others to start Quantum for All, a project designed to help K-12 teachers and students understand how quantum mechanics is the basis for current and future jobs. The project, based at UTA and funded by the National Science Foundation, also lobbied the Texas Education Agency to add quantum mechanics to the state’s science requirements. Thanks to their efforts, quantum is getting added to the TEKS (Texas Essential Knowledge and Skills) in 2023.

Matsler and her team aren’t waiting for 2023 though. They launched this new STEM camp to prepare both students and teachers now. And it’s not just for Arlington ISD. Most of the students at Martin’s camp came from high schools in the district, but anyone was welcome, like a pair of best friends and science lovers from Duncanville.

Arlington’s camp is just the beginning. This week, Matsler’s Quantum For All team is hosting the same camp in Katy. Then they’ll conduct similar camps this summer in Maryland, Utah and Wisconsin.

That’s a list they hope will expand in the coming years.

One of the biggest challenges to growing the camp and getting quantum information science (QSI) into high schools is the teachers.

“I told my kids I would teach modern physics, but I didn’t know how,” she said. “When I took quantum mechanics (at UTA), I thought it was something nobody got.”

Benson is a former student of Matsler’s at UTA and came to recognize the importance of QSI.

“I really wanted to make it applicable to high school students,” she said.

That’s why she signed up to teach at the STEM camp, along with teachers from Martin, Sam Houston and Bowie high schools, plus others from across the country. Teachers came from as far away as Alabama and Kansas to be a part of this inaugural camp.

The week before the camp, Matsler and her team trained the teachers and prepared them to instruct the students. The training was designed to not only get them ready for camp, but also to also equip them to teach QSI next year at their own schools.

“This camp is all about teacher confidence in incorporating quantum in an engaging way,” said Kendric Davies, a physics teacher from Liberty High School in Frisco and a member of Quantum For All’s Instructional Leadership Team.

Getting student buy-in is probably less challenging. They are innately curious and love technology.

“These are people willing to step out of their comfort zones,” said Robin Griffith-Yates, associate principal of the STEM Academy at Martin, about the campers. “These are curious kids – the ones wanting to explore and investigate.”

“I came to the camp because I like taking opportunities to expand what I know,” said Martin 10th grader Christina Tran.

“We start with things they’re familiar with, like phones and polarized sunglasses,” Matsler said.

Last Tuesday morning, it was polarizers and light.

“We are trying to see how much light is transmitted through the polarizers depending on the angles,” said Martin 10th grader Nailah Mwisongo.

She and her campmates had designed much of the equipment they used to conduct the polarizer experiment – and then printed it with 3D printers.

“We designed this stationary holder to hold polarizers at a certain angle,” Mwisongo explained.

The Martin camp is over now, but it’s just the beginning for the students and teachers – and hopefully the nation.

“Now I have a different approach to teaching encryption and coding,” she said after being a part of the camp. “It’s opening doors for teachers and students to see how quantum is applicable across disciplines.”

And if Matsler has her way, it will change how science is taught in high schools across Arlington and the entire country.

It’s a tall order. But the Martin camp has her off to a good start.