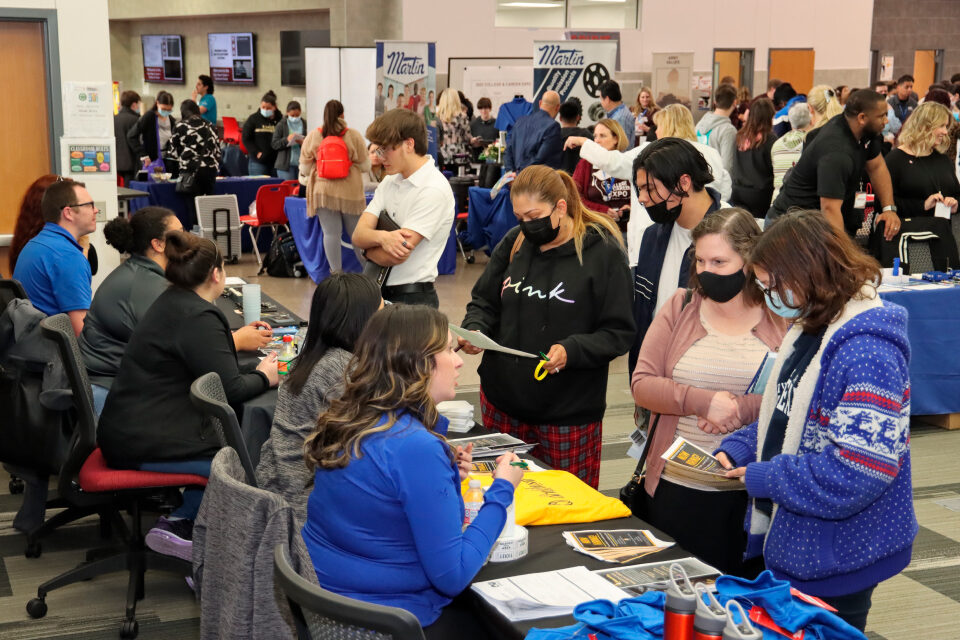 Zarell Hudson grew up with automobiles and now wants to grow old with them.

The junior from Seguin High School would just rather spend time tinkering under a car hood. That’s why he enrolled in the automotive program at Arlington ISD’s Dan Dipert Career and Technical Center (CTC) where he is learning the ins and outs of vehicle maintenance, like replacing spark plugs, wires and distributor caps, etc., to troubleshooting and resolving a host of other, more complicated issues.

By the time Zarell leaves the district, he’ll have earned the Occupational Safety and Health Administration and Automotive Service Excellence certifications, allowing him to go straight to work, if he so chooses.

Tuesday evening, Zarell showed off his academic home to his mother, who visited the CTC for the first time.

“It’s like an amusement park in here,” she said, although Zarell had to explain to her that the building isn’t usually so full of employers, business owners, organizations and universities manning booths filled with posters, giveaway materials and trinkets.

A little bit of everything

The Expo was sort of like an amusement park because it certainly had a little bit of everything. Students got a chance to discuss jobs and even conduct on-site interviews for part-time, full-time or post-graduation work. Parents were able to sit in on presentations about athletic recruiting and the scholarship process for high school athletes as well as detailed guidance on admissions, testing, academic scholarships and financial aid.

Joyce Allen-Pace, whose son is a junior at Lamar High School, sat in on the Paying for College presentation where she got an overview of FAFSA and the various types of aid, from grants and loans to scholarships and work-study.

“Very informational,” she said after leaving. “It just seems like so much.”

Which is why the Expo exists in the first place. 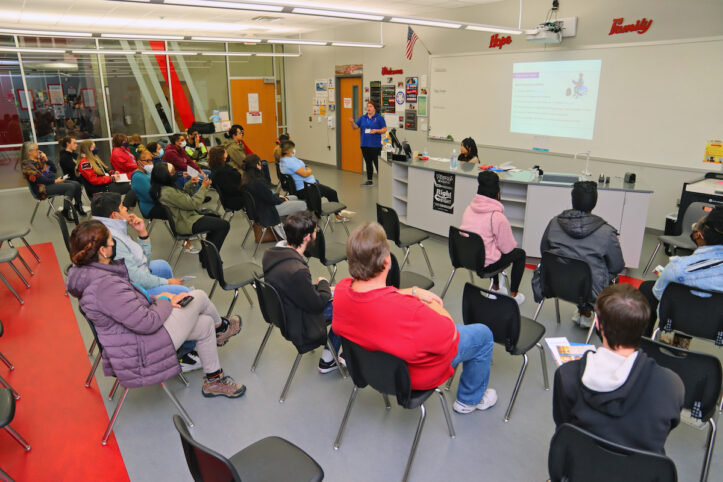 “We actually started this event as Sam Houston High School many years ago, and it has grown into this very large, district-wide event,” said Leslie Birdow of inspirED, the higher education servicing corporation that helped sponsor the event along with United Way of Tarrant County.

“What’s great about this is you can get what you need early on if you are interested in attending a school or just working and learn what a school’s admissions department requires or what an employer wants and make a connection,” said Birdow, whose group also partnered with Workforce Solutions to help with resumes and college applications.

“The college fair is great because you can get information from all of the colleges and find schools that maybe you have never heard of before but might be interested in attending.”

One of those schools was L Makeup Institute of Southlake. Students attending pursue careers in the makeup and special makeup effects industries. L Makeup Institute’s booth sat not too far from Texas A&M and Tarleton State University.

“Our graduates get jobs doing makeup and hair for photoshoots, film productions, plays, theater, bridal companies, that sort of thing,” said Ana Cerda, a financial aid representative for the institute. “I was a makeup artist for 20 years doing the retail route. Traveled the country on their dime to educate people about it. Even if you go the retail route, the least you will make in a year is $35,000, and can get up to $50,000, depending on the brand or the store.”

Just a few years ago, Jonathan Lucatero attended the Expo and came across LBL Architects. Then an Arlington High School junior, he liked what they were offering in terms of internships and eventually applied. After a year doing draftsmen work and other duties as an intern, LBL hired him full time.

“At first I wanted to be a lawyer,” said Lucatero, a 2019 graduate. “I looked at bunch of different career paths thinking about it, and then I landed on architecture. I took my first architecture class in high school. After that, I loved it, thought it was super interesting when it comes to the overall building process. I went to the CTC for two years, then went into the interning program. Now I’m here.”

So is Diana Conteras, who graduated from Lamar in 2018. Her route to LBL Architects was similar to Johnathan in going into an intern program. She instead went in as a University of Texas at Arlington student.

“Actually, when I was in high school, I was interested in engineering,” she said. “I took a summer class in architecture. I fell in love with it.”

Birdow said the last in-person Expo was in 2019 and included 42 businesses and 711 students. Those numbers were exceeded this year.

“This is a nice event because there are so many options for students,” said Erica Steely, a senior recruiter for Flex Tech, a low voltage and electrical staffing company. “If they want to go to college, or if they want to go straight to work, it’s up to them. I don’t remember having those kinds of options when I was in school. It kind of frees you.”

At Flex Tech, accepted applicants were trained on a Friday and start working on a Monday.

“In terms of starting work after high school graduation, you can’t get better than that,” Steely said. “Plus, if you want to go to college later, you can. Just save your money because you will be getting paid.”