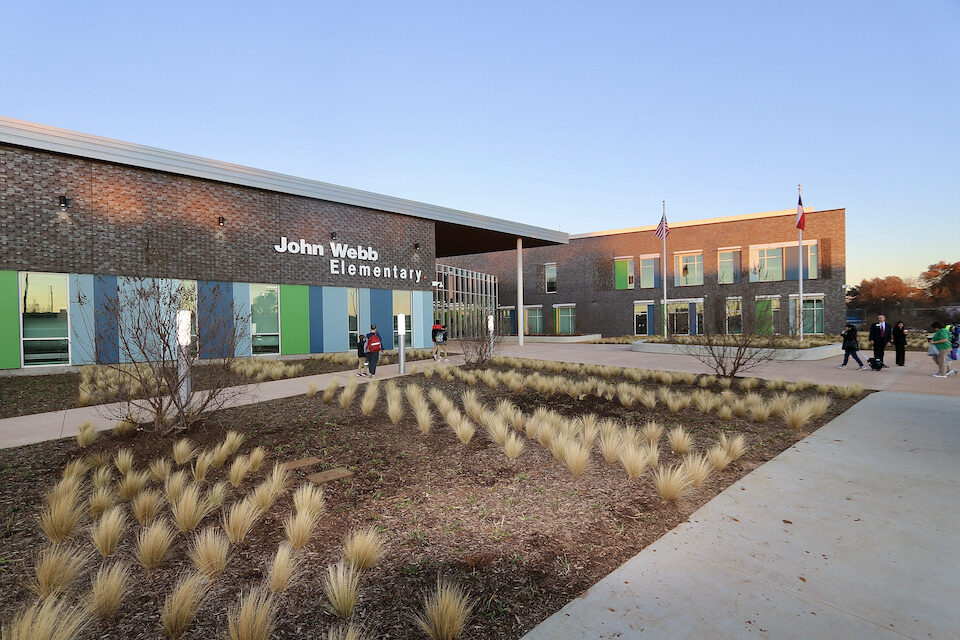 The 29-year-old Webb Elementary School has a new building for the first time.

When Webb first opened in 1993, it was in a school built in 1960 as Nichols Junior High. But Tuesday morning, Webb students and teachers started the second half of the school year in a brand-new building built just for them. 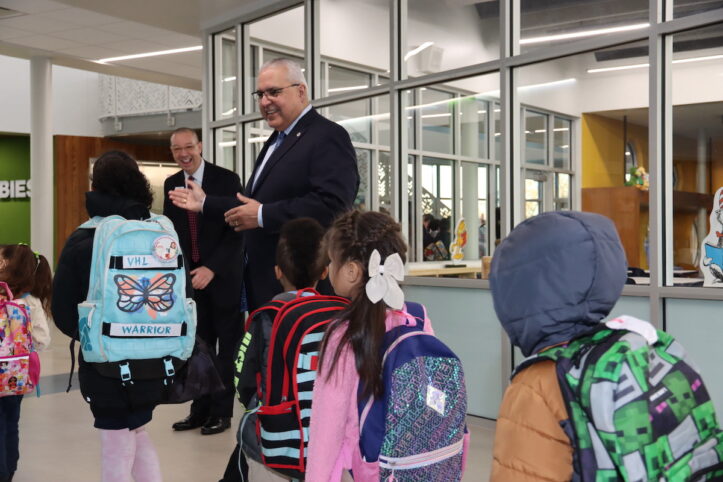 “Oh my gosh, it is so awesome,” said first-grade teacher Beatrice Davis. Davis has spent her entire 22-year teaching career at Webb.

Arlington ISD superintendent Dr. Marcelo Cavazos was there to welcome the students as they walked into their new school for the first time.

“Today has been wonderful,” he said. “It’s been a great morning. The joy in the students’ faces, and the teachers and the staff. It’s just exceptional. We’re so proud of the community, of our district for this really, really nice facility.”

The excitement and euphoria for the new school continued throughout the day. Teachers and staff agreed: it’s “amazing.” Here’s what several had to say.

“We had an amazing first day in our new Webb building today! The kids came into the school with smiles and in awe of what our new building looks like. They were excited to see their new classrooms and also the library, cafeteria, music and art rooms and the gym. The older students think that it is pretty cool that we have stairs to use. For the students I had in class today, the word that I heard the most, in regards to our new Webb, is that it is cozy. I feel very honored to be the first music teacher in the new Webb building!”

“The first day at our new Webb was absolutely AMAZING! Having seen this project through from the groundbreaking to the first day with our students was everything I imagined 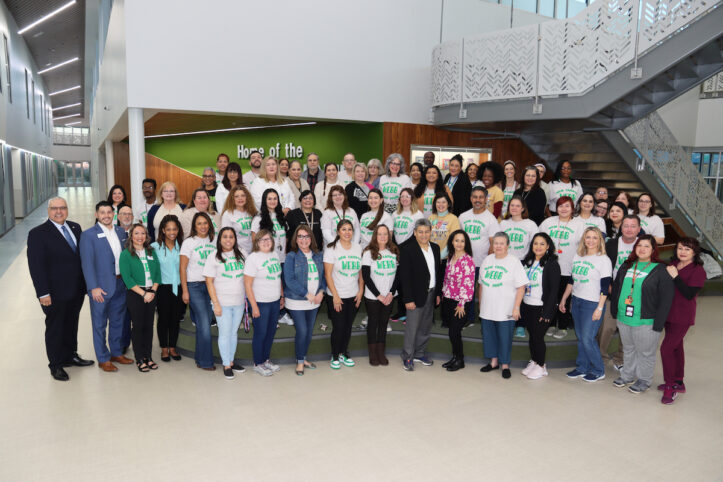 it would be and then some. It was like the first day of school times 10! Everything ran smoothly, and watching the faces of our students was magical! Lots of big smiles and eyes.

“Today was a success for sixth grade! The students were all here and excited about their new classrooms. I actually heard one student walk into class and say, ‘Wow!’ They really enjoyed the collaborative spaces, and the new playground was definitely a hit. The boys couldn’t stop talking about playing basketball on the new court at recess. Our sixth-grade team was truly grateful for a smooth start to the second semester, and we hope to have an amazing remainder of the year!”

“Today was such a great first day of school at the new Webb! All systems that were planned by our staff committee, from arrival to dismissal to lunch table arrangements, were successful. Most of our students knew where to go this morning as a result of our Sneak-a-Peek in December. Their faces in the pictures tell it all! Excitement, surprise, happiness and many more emotions were felt today by staff and students. It truly was a great beginning at our new home! I am extremely grateful for all of the support from my staff, parents and district!” 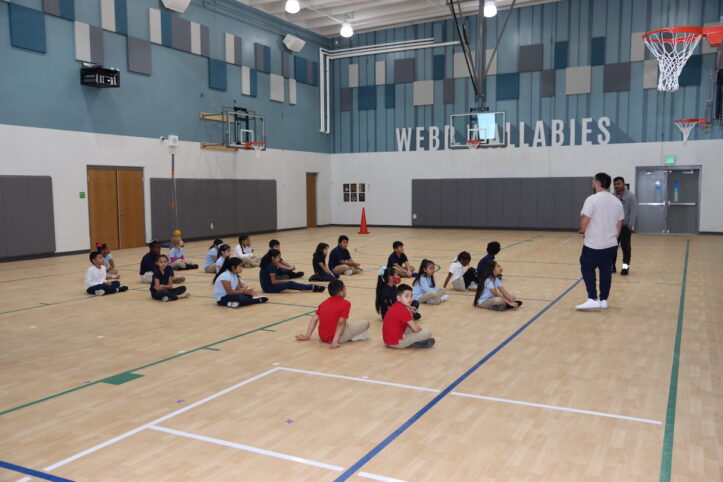 The new Webb, a state-of-the-art two-story school, is right next to the old Webb, which will be demolished later this year. The new 102,375 square-foot facility features four to five classrooms for each grade (pre-K-6), a media center, fine arts classrooms, STEM labs, makerspace, collaboration spaces, a special education motor lab, two playgrounds and much more.

Webb is the first of four school replacements funded by the 2019 Bond, an effort to modernize the district’s schools and revitalize their neighborhoods. It’s all about providing generations of students with the opportunities they need to succeed in the 21st century. In addition to Webb, a new Berry and new Thornton elementary are also under construction, slated to open for the 2023-24 school year. Finally, Carter Junior High will be replaced with a new building at a new location – the site of the former Knox Elementary (and now the temporary Thornton).

Even with an incredible new building, Webb’s greatest asset is still its people, past and present.

“I think the most important thing is understanding that really the kids, the people, the staff – that’s what makes a school,” Cavazos said. “The culture that Webb has and the expectations they have and the excellence they have really drive the school.”

The students understand that, too. 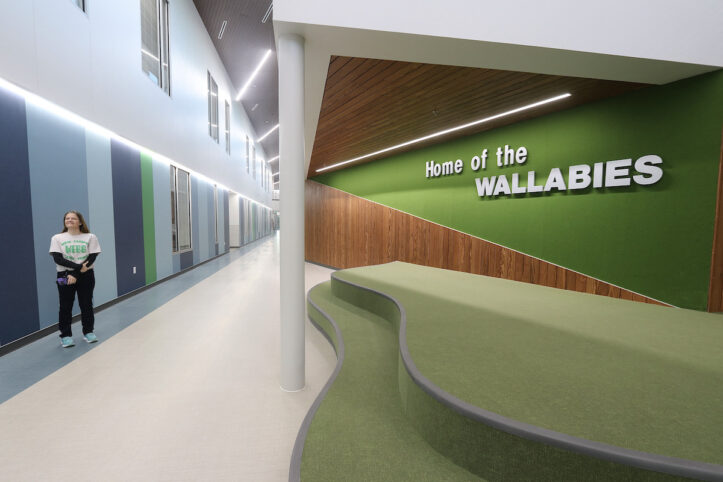 As sixth-grader Riley T. made her way into the new school for the first time on Tuesday, she admitted she was a a little nervous.

It is still the same people, with the same love and the same commitment to students and education. But now they have a building to match.

The 2019 Bond is doing a lot more than building four schools. Learn about all the bond projects at aisd.net/bond from new playgrounds to new school buses.